This Sunday was the Christening of my beautiful baby niece Evaleena Grace – it was a lovely service followed by a very tasty meal at a pub just up the road from church. It was nice to catch up with some family members we don’t see all that often too.

Caius was joined in the lake today by QWERTY Mum’s lovely husband and Liberty’s boyfriend. We did all have a bit of a giggle at them as they strolled across the grass to us in their wetsuits to leave their bags with us. Though not as much as we laughed later when they were trying to get the wetsuits off afterwards and had issues! 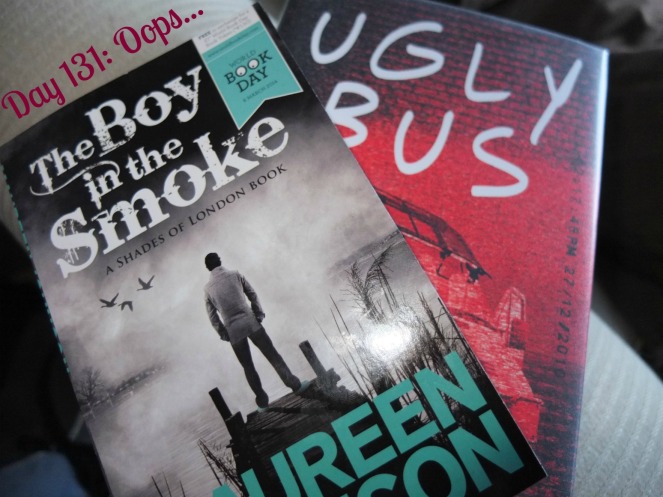 I had to go return a heap of library books today and before I set off I promised myself that I wouldn’t take anymore books out for myself because I already have four books on the go. Then these two just sort of fell into the pile of picture books I was getting out for the Smalls…

I wandered to the shop this evening because we ran out of bread and as I walked the sun began to set – one side of the sky was a dark, stormy grey and yet thick, syrupy golden sunshine was fighting the gloom. It made the leaves on the trees look almost unreal, they were so bright against the shadows. Just beautiful.

The Duplo bricks had all become lost under the cars and the boats and the planes and ‘things’ in the boxes and the Smalls hadn’t been trying to build anything because it was too much hassle to find enough bits so I sat down today and sorted it all out. We have a whole lot of Duplo.

It has rained for most of today but Arthur insisted that he wanted a picnic outside so we grabbed a quick five minutes between rain showers and he got his picnic.

Caius earned himself some serious boyfriend points by getting McBusted tickets as an anniversary present back in December and taking me even though he really didn’t want to himself. Aside from a bit of crowd weirdness next to us it was incredible and I had an awesome time – I don’t care how sad that makes me.