I will start with my review for T.J. Lebbon’s Coldbrook which isn’t actually released until 28.04.2011 (Edit: New release date has been announced of March 2012). What I have read is the 59 page sampler book that I received at Alt. Fiction 2010 and I enjoyed it so much I couldn’t resist talking about it, even just a little bit.

I’m a bit of a zombie newbie and this has certainly piqued my interest by combining zombies with ‘what’s really out there?’ big universe questions and humanity’s idiot curiosity (I am of the general opinion that, in time, curiosity is going to kill much more than the cat).

Fast paced and with good strong characters, even just these 59 pages has got me begging for more and the final book’s release date feels all too far away.

(To read the sampler for yourself – so long as you don’t mind a bit of ‘e-reading – simply follow this link to the Coldbrook website and click on ‘Read the exclusive sampler’.)

The King Of The Crags, Stephen Deas 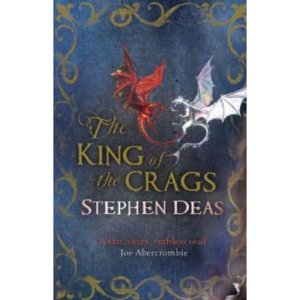 Summary (as non-spoilerish for The Adamantine Palace as I can manage): The King of The Crags continues from exactly where The Adamantine Palace left off with no let up in pace or intensity. Jehal is still up to his old tricks but with the added inconvenience of falling for the wife he married for power, creating a jealous rift between himself and his lover. There are rumours of a revolution, led by the legendary Red Riders, and Queen Shezira’s precious white dragon, Snow, is still missing.

The Realms are crashing steadily towards a war and the missing dragon, far from the care of any alchemist or Scales, could be a much bigger danger than most would even dare to imagine.

What I Liked: The pace of the story is carefully measured, never too slow, often fast and always keeping you reading all the way through.

The characters, though not all likeable, are all thorough and believable and you find yourself endlessly curious about what each of them is plotting or planning against the others. Stephen Deas never gives too much away about any of them yet at the same time never makes them so closed that you don’t care for them either. I have a passionate dislike for a few characters and fondness for others – despite not really knowing, ultimately, who is good and who is bad.

I also love the fact that, for once, dragons are as dragons should be. They are not docile, friendly ‘pets’ or the slightly Disneyfied versions of dragons that we have been endlessly fed that don’t mind being used as glorified horses or have a random fondness for these small annoying human things that shout, wave pointy metal sticks and kill each other. No, in these books they think they are food. Which is a nice change. I like proper dragons.

What I Didn’t Like: Despite having read the two books very close together I still ended up being a bit confused at times by who was married to who and who had feuds with which family and why. The family trees at the beginning of the book were useful to combat this but it was a bit frustrating to have to stop mid-action to flick back and find out just who Prince So-and-So was and why he was arguing with King Blah. This wasn’t a major flaw and it certainly didn’t stop my utter love for the books, indeed, it may well just have been down to my terrible memory for names.

I also sincerely dislike the fact that I now have to wait for the next instalment to find out what happens next. *Pokes Stephen with a pointy metal stick* Write faster!!

5 thoughts on “Reviews: The King of the Crags by Stephen Deas and Coldbrook (Sampler) by T.J. Lebbon”