I know there’s loads of stuff all over the press at the moment about breastfeeding being a preventative against teenage delinquency but that’s not what this post is about.

I am trying to get Arthur to accept a bottle of expressed milk so that I can have a nice evening out some time, or even just hand him over to someone else for a cuddle at feed time.

He is not impressed with this idea. 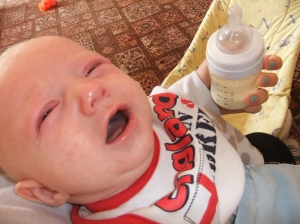 He was quite happy at first just playing and pushing the teat around with his tongue – he even grabbed the bottle for a bit himself and settled for a cuddle with it.

But would he drink from it? Ha. Would he heck as like. He screamed blue murder at me instead.

By this point Tori was yelling at me because I was making Baby cry and I was feeling like the worst mother in the world. Arthur went to sleep. I went and washed up to calm down and decided to try again when he woke up. By that point he should be really hungry and less inclined to reject the evil plastic teat.

Wrong. Cue more wailing. And more. By now Tori had stopped telling me off and started saying ‘waaa’ whenever Arthur cried and then giggling madly. I really wanted ear plugs at this point.

After a load more miserable noises and grumpy faces and a bit of playing Arthur grudgingly drank about ¾oz and then gave up and went back to sleep.

I had a quick smooch on the interweb and found a few people suggesting that you should give Baby a dummy to get them used to the feel of the plastic and then switch over to the bottle once they’re calm. I went and rummaged in the kitchen and dug out a dummy that came free with a pack of bottles I got before Arthur was born. It was still in its sterile wrapping and case because I’ve never used a dummy with either of the kids.

When he woke up he instantly whined – clearly hungry (and I don’t blame him). So I offered him the dummy and eventually he stopped spitting it out and sucked it. He looked very odd…

After a couple of minutes I whipped out the dummy and immediately replaced it with the bottle. 30 seconds later Arthur said ‘WAAAAAAAAAAAAAA’ and then choked.

I then decided to give up for the day and feed him myself. ¾oz in nearly 6 hours isn’t enough for a growing boy – he was fed up, I was fed up and Tori was giving me dagger stares from the playpen. I will persevere and keep trying and he will get there eventually. It’s just tough and I don’t much like it.

In this Boob vs Bottle battle the score is very definitely Boob 1 : Bottle 0

8 thoughts on “Boob vs Bottle”