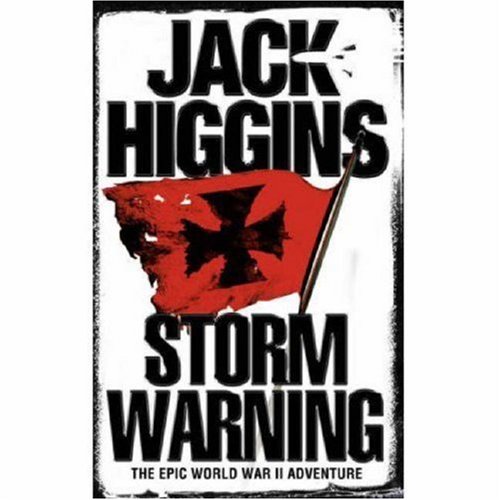 Summary (from Goodreads): In 1944, as Hitler unleashes a last desperate attack, enemies, lovers, and friends converge in the fog-shrouded North Atlantic on a life-and-death rescue attempt.

What I Liked: I approached this book blind, I committed the sin of judging it by its cover. Worse, it was the back cover that won me over rather than the front. The bold tag-line ‘In the end all roads lead to Hell’ grabbed me and I picked it up, handed over my shiny 50p to the charity bookstall seller and committed myself to reading.

I like how Jack Higgins approaches the naval nature of the book, he doesn’t treat the reader like an idiot and explain everything but neither does he get so technical that you have no idea what is going on and lose interest. He strikes a neat balance that is interesting but not overwhelming.

His characters are well-formed and vibrant. From the stereo-typical cocky, German U-Boat ace through to the pious, well-meaning nuns on board one of the ships.

I loved the variety of vessels depicted in the book through the various characters from the beautiful but ageing barquentine Deutschland to German U-boats and old Scottish lifeboats. They didn’t feel like boats so much as they felt like characters in the story. Likewise the sea and the weather. This was one of the things that pulled me so firmly into the story – I didn’t just care about the people, I cared about their boats and I shared their awe, respect, love and fear of the sea and the wind.

Each chapter begins with an excerpt from the Captain’s log of the Deutschland, these provided you with a date and time for the beginning of the chapter and helped you keep up with the passage of time as well as gave you a feel for conditions on the journey.

What I Didn’t Like: There were a couple of times near the start where I found myself losing interest because of all the jumping around but once all the different characters were established that quickly ceased to be an issue.

I had a bit of trouble discerning between two of the female characters at times, mostly because they were called Jane and Janet and often in the same scenes. They could have done with names that were less similar and bolder character differences when they were together.

Rating: I enjoyed this book a lot more than I expected to. You know me, I read fantasy books about vampires and zombies, I don’t read novels about WWII. I still think I should be choosy about my WWII-type books though, I expect there will be a lot out there that I just wouldn’t like for reasons similar to why I dislike playing CoD and the like. However, I clearly shouldn’t just dismiss them as I have been in the habit of doing as Storm Warning gets a 4/5 from me.

It would appear I love a book that feeds my fearful adoration of the ocean and all those who share their life with her.