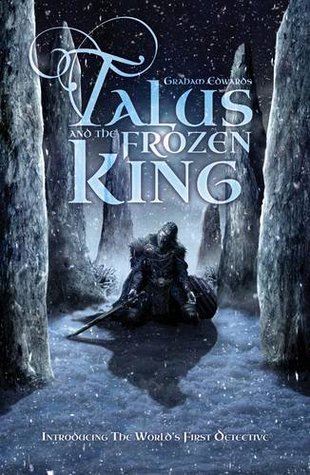 Where Did I Get It? Kindly received from Solaris for review.

A dead warrior king frozen in winter ice. Six grieving sons, each with his own reason to kill. Two weary travellers caught up in a web of suspicion and deceit.

In a distant time long before our own, wandering bard Talus and his companion Bran journey to the island realm of Creyak, where the king has been murdered. From clues scattered among the island’s mysterious barrows and stone circles, they begin their search for his killer. But do the answers lie in this world or the next?

Nobody is above suspicion, from the king’s heir to the tribal shaman, from the servant woman steeped in herb-lore to the visiting warlord whose unexpected arrival throws the whole tribe into confusion. And when death strikes again, Talus and Bran realise nothing is what it seems. Creyak is place of secrets and spirits, mystery and myth. It will take a clever man indeed to unravel the truth. The kind of man this ancient world has not seen before.

My Review: First and foremost, the moment this book landed on my doormat I fell in love with the front cover. Atmospheric, mysterious and full of depth – it really enticed me in and made me excited about what could be inside the pages within.

The Frozen King throws you straight into the story, there is very little in the way of backstory for Talus and Bran, the two main characters, and you are immediately plunged into the cold northern world they inhabit. This does not mean that their characters are shallow by any means – the details of their lives and characteristics are steady dripped throughout the story so you are never bogged down with information but are plenty capable of building images of them in your mind.

Indeed, the character development through the book is very good – you see how situations bring out the best and worst in people and how even the most confident character can question themselves sometimes to great narrative effect.

I loved the author’s way with words – Talus is a bard and so his speech is naturally poetic and dramatic, but the narrative and speech of the other characters are just as stunning. Almost wistful at times and crushingly to the point when needed, the pace is steady but gripping and keeps you turning the pages well past the ‘just one more chapter’ point you promised yourself.

The story keeps you guessing, too – just as you think you have it all worked out, a curveball is thrown in and you discover you are barking up entirely the wrong tree. I thought I had it nailed, then completely doubted myself as things changed and was somewhat surprised when I was almost right at the end. The mystery of the Frozen King is nicely solved but enough is left open at the end that I am really curious as to where Talus and Bran go next in the series.

I love the world Edwards’ builds – it is beautiful but stark, lonely and deadly yet full of vibrance and life. Teetering on the edge of fantastical as well as historical I fell in love with the landscape and was genuinely a bit sad when I finished as I really enjoyed immersing myself in their world.

Not a long read, but a really enjoyable one. Highly recommended.