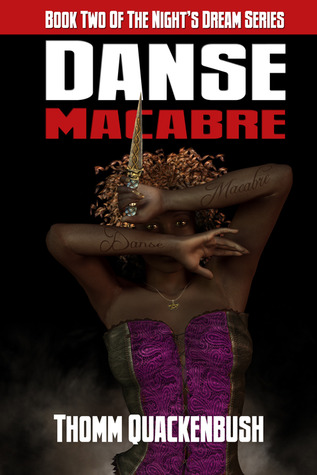 Where Did I Get It? I received a copy from the author in return for an honest review

Blurb: When one dresses largely in black and belongs to a Wiccan coven on campus, having an older boyfriend who thinks he is a vampire almost makes sense. However, when Roselyn’s lover Dryden becomes an actual vampire-albeit a reticent one-and her preternatural roommate Shane is mistakenly taken hostage in her place, it is up to Roselyn to take on the cockroaches of the daemonic world without ending up on the wrong side of a pair of fangs.

He watched the girl, her hands clasped and eyes downcast, a tendril of her hair tickling her nose in a way she found conspicuously difficult to ignore.

My Review: I will open this review by saying I did not finish reading Danse Macabre and so the following is written with the knowledge that I may be utterly and completely wrong on all counts.

Danse Macabre is the second in a series. I didn’t know this before I started reading, but I knew within the first few pages because I had no idea who anyone was or what was going on but it felt like I was supposed to. This feeling never really went away.

There were odd hints as to what had happened previously, but not enough for it to make any sense to a new reader which made me feel excluded and immediately broke my attachment with the book.

I persevered though, because a lot of books start out shakily and then end up brilliant a few chapters in.

Sadly, this one didn’t. I loved the ideas and the basic storyline – it was right up my street and I really wanted to be sucked in and enjoy the ride but it never managed to grab me enough to make me care.

The characters all felt very two-dimensional. By that I mean that if you had outlined the story idea to me, I could have written a list of the stereotypical required cast of characters required to make it work and those are the characters Thomm Quackenbush presented. They are all perfectly flawed and exactly what is needed and nothing much else, they didn’t intrigue me and they didn’t feel ‘real’ enough for me to particularly care about what happened to them.

One of the main characters, Dryden, was also utterly unlikable. Now there is nothing wrong with unlikable characters – often they are the most interesting ones of all – but there wasn’t anything else about Dryden, he was just boring and a bit of a prat. He didn’t have a redeeming quality or interesting hidden side that was hinted at and even his girlfriend didn’t seem to like him much which wasn’t a great selling point. I was probably supposed to care when he got turned into a vampire but mostly I was just disappointed that they didn’t accidentally kill him.

Danse Macabre felt a little bit like pieces of work I saw (and wrote!) when I was at university – it was a perfectly good idea and there wasn’t anything particularly wrong with it as such, it just needed tweaking and polishing up. It needed the epic ramble of a character justifying her self-harming cutting out (because she wouldn’t need to justify it to herself so enthusiastically, she’d just do it), it needed the characters fleshing out and building up and it needed to cut to the chase a whole lot faster.

I stuck with Danse Macabre until I hit 30% through and then I gave up. If a book hasn’t grabbed me by 30% in then I’m afraid I will put it down. Life is too short to read books that feel like wading through treacle to get nowhere and there wasn’t enough in that 30% to make me keep on turning the pages.