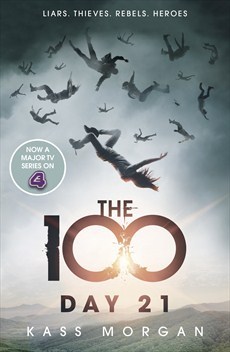 Ever since a devastating nuclear war, humanity has lived on spaceships far above Earth’s radioactive surface. Now, one hundred juvenile delinquents — considered expendable by society — are being sent on a dangerous mission: to recolonize the planet. It could be their second chance at life…or it could be a suicide mission.

CLARKE was arrested for treason, though she’s haunted by the memory of what she really did. WELLS, the chancellor’s son, came to Earth for the girl he loves — but will she ever forgive him? Reckless BELLAMY fought his way onto the transport pod to protect his sister, the other half of the only pair of siblings in the universe. And GLASS managed to escape back onto the ship, only to find that life there is just as dangerous as she feared it would be on Earth.

Confronted with a savage land and haunted by secrets from their pasts, the hundred must fight to survive. They were never meant to be heroes, but they may be mankind’s last hope.

The door slid open, and Clarke knew it was time to die.

My Review: Before I read these books, I had watched Twitter and the rest of the Internet go a bit mad over them – they raved about the books and then they raved about the TV series – and I generally felt a little bit left out. So when I managed to bag myself a copy of Day 21, I used it as an excuse to go buy The 100 as well and catch up on what everybody was talking about. (I still haven’t watched the TV series, but I do at least feel in the loop now!)

The first thing to say is that if you are a hardened sci-fi fan, you are probably going to think they are rubbish, however, if you aren’t big into sci-fi then they will be right up your street. It is very gentle on the science fiction – yes, it is post-apocalyptic and mostly set on a space ship – but there’s no technical jargon or twenty-legged aliens or anything like that. It is very easy reading.

I finished both books in a couple of sittings – they were fast-paced, non-challenging and reasonably exciting. The stories are pretty predictable – I had worked out most of the ‘twists’ before they were properly revealed but the characters and stories were interesting enough that this didn’t really matter.

The second book followed on neatly from the first and didn’t seem to suffer from ‘second-book-syndrome’ – it had enough of a plot line to keep you hooked and curious as to where it was going to lead. There was plenty of character development and it leaves you on a decent cliff-hanger for book three. Again though, it was all pretty predictable and very easy reading. (Also, I am informed that Day 21 is completely different to the second series of the TV version – but as I haven’t watched it, I can’t comment.)

I really enjoyed reading both The 100 and Day 21, and while I would mostly class them as ‘beach reads’ they are very good beach reads and I will almost definitely look up the next book when it comes out. A great series for first-time dabblers with sci-fi, fans of YA and anyone who wants a good, fun read.