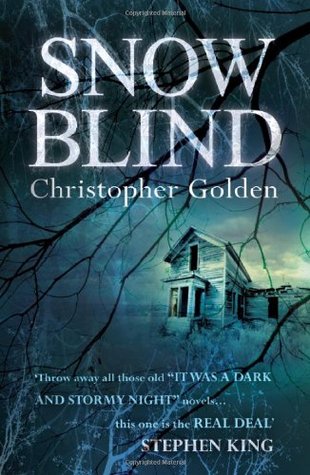 Blurb: Twelve years ago the small town of Coventry, Massachusetts was in the grasp of a particularly brutal winter. And the came the great storm. It hit hard. Not everyone saw the spring. Today the families, friends and lovers of the victims are still haunted by the ghosts of those they lost so suddenly. If only they could see them one last time, hold them close, tell them they love them.

When a new storm strikes, it doesn’t just bring snow and ice, it brings the people of Coventry exactly what they’ve been wishing for. And the realisation their nightmare is only beginning.

Ella Santos stood on the sidewalk with a cigarette in her hand, watching the snow fall and feeling more alone than she ever had in her life.

My Review: I should have guessed from the blurb that this was a bit of a silly book to pick up on a stormy evening when I was home alone, but that is exactly what I did. It… added to the atmosphere. And my total lack of sleep.

Very King-esque, I enjoyed how the story was set up – giving you flashes of people’s lives in Coventry as the original storm set in and turned a little more than nasty. You got just enough to start to care about each set of characters but not so much that you felt bogged down by their backstories or the number of people introduced. You cared just enough that as the storm began to take its victims, your heartstrings were tugged in all the right places and you were left a little breathless and hurting by the time the storm had passed.

The book then fast forwards twelve years and you are reunited with the characters left behind, seeing how they moved on (or didn’t) and it is as you follow them that things start to get a little weird and this weirdness only intensifies as another huge storm edges closer to Coventry.

Christopher Golden is a master of description – the wind may have actually been howling outside my window and the rain rattling on it like bony fingertips but even if it hadn’t, I would probably have thought it was. I was totally immersed and could see the swirling eddies of snow, feel the biting wind and taste that bitterness of ice on the air – it is definitely the kind of book you want to read snuggled up in a winter duvet!

The book picks up pace as it advances and I found it very hard to put down once I had started reading – I needed to know what happened next. It wasn’t far from traditional ghost stories in essence but it was well presented and carried out and the great characterisation made everything that little bit more powerful and unnerving.

A great winter read if you like something to send a chill up your spine, Snow Blind is perfect for a dark night, curled on the sofa with a glass of wine.