A while back, you may remember that I was a part of the Cover Reveal for Edward Aubry’s new novel Unhappenings – well now it is time for the review tour to see if the words inside lived up to the super cool front cover! 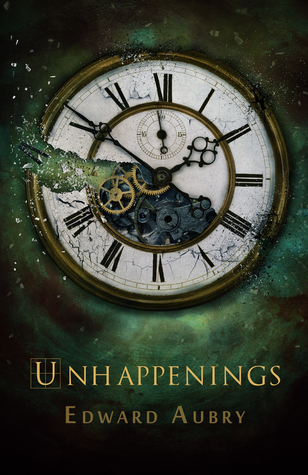 Where Did I Get It? I kindly received a copy for review from the publisher

When Nigel Walden is fourteen, the unhappenings begin. His first girlfriend disappears the day after their first kiss with no indication she ever existed. This retroactive change is the first of many only he seems to notice.

Several years later, when Nigel is visited by two people from his future, he hopes they can explain why the past keeps rewriting itself around him. But the enigmatic young guide shares very little, and the haggard, incoherent, elderly version of himself is even less reliable. His search for answers takes him fifty-two years forward in time, where he finds himself stranded and alone.

And then he meets Helen.

Brilliant, hilarious and beautiful, she captivates him. But Nigel’s relationships always unhappen, and if they get close it could be fatal for her. Worse, according to the young guide, just by entering Helen’s life, Nigel has already set into motion events that will have catastrophic consequences. In his efforts to reverse this, and to find a way to remain with Helen, he discovers the disturbing truth about the unhappenings, and the role he and his future self have played all along.

Equal parts time-travel adventure and tragic love story, Unhappenings is a tale of gravely bad choices, and Nigel’s struggle not to become what he sees in the preview of his worst self.

The first time my life unhappened was Beth Richmond. I was fourteen. She was fifteen. There was a kiss involved.

My Review: I have read a few time-travel novels and generally I find they are either really good, or terrible. There is no in between. Luckily, Unhappenings was one of the former and lived up to the stunning cover that caught my eye in the first place.

Not a story that throws you straight into the action, Unhappenings builds steadily, building a well rounded picture of Nigel and his life of peculiar ‘unhappening’ events of varying magnitude – from the mundane of his bike changing colour and nobody remembering it being any different, to his high-school girlfriends vanishing from history.

Gradually the weirdness intensifies and, after he befriends a mysterious time-traveller who keeps appearing in his life and a slightly unpleasant meeting with what appeared to be a slightly mad older version of himself, Nigel begins to try and work out what is going on and why it only seems to be happening to him.

The trouble with time-travel is that you are hopping backwards and forwards with story threads leading all over the place and characters in different times, never mind places, and sometimes it all gets too much and you have no idea what is going on. Unhappenings‘ short chapters stop this from happening by containing each event in its own structured space, letting you know where you are and when each ‘event’ is finished. It still flows well and doesn’t feel bitty at all – a very clever decision by Edward Aubry that I really appreciated as a reader.

There were several twists in the plot that I totally hadn’t seen coming and kept me turning pages long after I should have gone to sleep. I can’t say too much without giving things away but the relationships between the characters across time were really well handled and the true backbone of the story was pure and simple love.

As ever, the path of true love does not run smooth, and some of Nigel’s choices in the book have utterly catastrophic consequences beyond anything most people cause in their pursuit of happiness. This makes for some pretty scary action, confusion and several heart-wrenching moments that had me on the edge of my seat.

A must for anyone who likes time-travel, science fiction and that type of fantasy – Unhappenings is a brilliant novel that starts sedately and soon builds to a fast-paced but thought-provoking conclusion. A great start to my 2015 reading adventure.

One thought on “Unhappenings Review Tour with Curiosity Quills Press”