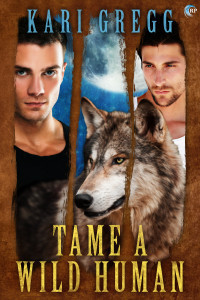 Where Did I Get It? Review copy received from NetGalley in return for an honest review.

Blurb: Drugged, bound, and left as bait on the cusp of the lunar cycle, Wyatt Redding is faced with a terrifying set of no-win scenarios. Best case: he survives the coming days as a werewolf pack’s plaything and returns to the city as a second-class citizen with the mark—and protection—of the pack. Worst case: the wolves sate their lusts with Wyatt’s body, then send him home without their protection, condemning him to live out the rest of his short life as a slave to the worst of humanity’s scorn and abuse.

Wyatt’s only chance is to swallow every ounce of pride, bury his fear, and meekly comply with every wicked desire and carnal demand the wolf pack makes of him. He expects three days of sex and humiliation. What he doesn’t expect is to start enjoying it. Or to grow attached to his captor and pack Alpha, Cole.

Sweat trickled down Wyatt’s temples and pasted the thin cotton of his oxford to his shoulders and spine.

My Review: I don’t really know where to start with this one. Judging by the cover came back to bite me on the bum in this case – I didn’t even read the blurb just saw the wolf and asked for a copy.

The cover is better than the contents.

For a start, the blurb is almost as long as the book and gives you all of the backstory you are going to get. There is little to no world-building, almost no character building at all and Wyatt’s character is, quite frankly, a bit pathetic. He doesn’t really have any redeeming features unless you can count being a successful businessman of some variety, his claims that everything is against his will are so pathetic that I didn’t really believe him after about ten pages. He wasn’t submissive so much as willing which I don’t think was how it was supposed to read.

I got the impression that this was meant to be a risque fantasy of dubious consent on all levels with the fear level creating most of the ‘appeal’ but sadly Wyatt’s patheticness meant that the lack of consent lost its edge very quickly and the wolves weren’t particularly scary. So much so that the author had to regularly remind us readers that every full moon all the humans battoned down the hatches for three days in fear because if we hadn’t had that reminder we probably would have forgotten they were even wolves.

They did torture some other bloke at one point but even that was a bit ‘I’m putting this here so you remember that these people are dangerous and mostly animal‘ and didn’t add anything to the story. Not there was anything to the story other than ‘lots of sex’, if I’m honest.

There were a couple of things that bugged me – Firstly, there didn’t seem to be any girl wolves. From what I could tell they were all blokes and they were all gay which isn’t really a great survival model if you ask me.

Secondly, somewhere near the start a wolf retracted his claws after using them. Really? A wolf retracted its claws? They aren’t cats and I’m not an idiot. Get your wolf facts right if you’re going to make it a characteristic of 95% of your cast.

I have given Tame A Wild Human two stars because the writing itself wasn’t awful and because the author was at least capable of writing sex without using ridiculous euphemisms for everything. There were no epic rainbow orgasms or stirring love cauldrons to be found, which is always a good thing if you ask me.

One thought on “Tame A Wild Human ~ Book Review”