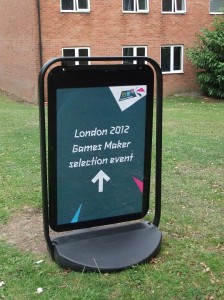 On Wednesday I set off on the next stage of my personal adventure to try and be a part of the London 2012 Olympics. Months and months and months ago I filled in the application form to volunteer as a Games Maker, sent it off into cyberspace and sat back to wait. Well a few weeks back I got an email inviting me for an interview at a ‘Selection Event’ at Warwick University in Coventry so I booked my train, stocked up the freezer with milk for Arthur (which he duly refused to consume) and, come Wednesday, I set off to see what the day held in store.

It was my first ever whole day away from Arthur and the first time I had visited the Uni so I was a bit nervous before I even started to consider the interview and event itself! The train trip went well and I arrived in plenty of time so I located the right bus stop (which my friend who attended Warwick kindly told me how to find and which bus I needed to get – eliminating a bit of worry) and then went off in search of something to eat.

Conveniently the first place I spotted was a Burger King just over the road from the bus stop – eating there meant I could cross something off my Day Zero list too! After lunch I had a bit of a mooch around the shops before heading to the bus stop.One double-decker bus trip later (Top deck, front seat – of course) I found myself at Warwick Uni for the first time and was ever so slightly horrified by how massive it was. I knew my Uni was small but you could fit all of our buildings into one department of this place!!

I was still over an hour early arriving on campus so I went for a bit of an explore to try and relax a bit. It sort of worked as I sat and watched a bald magpie hopping around and found the most beautiful water lillies in a water feature. 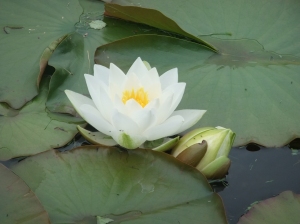 Then I went to find where it was I was actually supposed to be going even though I was still half an hour early. I found the place and was asked to hang around until my alloted time – so I went and sat on a small hill and had a conversation with a very curious squirrel whom I christened ‘Colin’. I told him about how nervous I was and asked him what he thought were the best things to say in the interview. Passers by most probably thought I was completely mad. (They were probably right.)

Once Colin had gotten fed up of me and climbed a tree and it was only 5 minutes til my Event time, I went back and joined the other people waiting to go in. Finally they let us in and I forgot to be nervous and started being excited instead. We were welcomed, given an overview of what was going to happen and in what order, given pink wristbands to wear and offered some Cadbury’s Heros to munch on (I approve of their choice of sponsors! 😉 ). Then our photos were taken and it was into a small exhibition about the Olympics before watching a short film designed to stop us panicking about the interview as well as thank us for volunteering and introduce a few of the Olympics Sponsors.

Then it was interview time and all my terror came flooding back. Luckily my interview was led by a lovely chap who set me back at ease and aside from talking at forty-thousand miles an hour when answering the first question I think I did okay. I calmed down, slowed down and almost enjoyed myself. I think it went okay and there were no questions I couldn’t answer or were difficult to understand.

Finally we were asked to write on a big notice board which would be put together with boards from all the other events to make a Games Maker wall where everyone who went for an interview had left their mark. I did my bestest handwriting and even managed to spell my name right 🙂

Then I jumped back on the bus back to Coventry with ages left before my train (I was possibly a tiny bit over-cautious when booking my trains), went for a mooch around some more shops, bought some bargains in a clothes sale, treated myself to a large slice of cake and then went to get my train.

First train was on time and all was going well…then the second one got steadily later and later and later. 40 minutes huddled on a strange station waiting for a train delayed due to a ‘fatality on the line’ wasn’t particularly fun and meant that I missed my next connection too. Eventually I made it home having watched a beautiful sunset and eaten a very overpriced sandwich and packet of crisps.

I was tired but happy – Sy met me with a cuddle and a cold glass of vodka and lemonade which rounded the day off nicely and I have a good feeling about how it all went. Fingers crossed this was only the beginning and there will be more to come on my Games Maker adventure.

Join 2,042 other followers
Follow Carole Finds Her Wings on WordPress.com