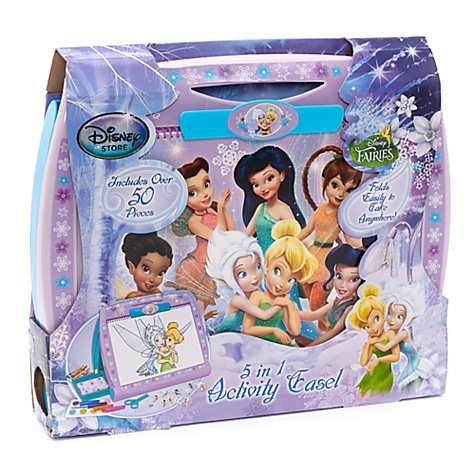 My very lucky daughter was kindly given the opportunity to review Disney Store UK’s Fairies 5-in-1 Easel Activity Set and to say she was pleased is a bit of an understatement.

After all the hustle and bustle of Christmas, Tori was feeling a distinct lack of presents, so this turning up on the doorstep was a very welcome surprise. Arthur was unceremoniously locked out of the bedroom so she could have a go all by herself, he wasn’t allowed to share until Tori had explored everything it had to offer by herself!

Over the last few weeks, Tori has started trying to draw recognisable things for the first time and she LOVES experimenting with different mediums so the 5-in1 easel was perfect for her.

The easel is very sturdy, folding out and clicking neatly into a triangle that is just a bit bigger than the beautiful A4 activity book that clips onto the front. There is a little drawer in the base which holds everything you could possibly need to fulfil your Disney drawing dreams – 4 wax crayons, 4 whiteboard markers, two stencils, paintbrush and paint set, safety scissors, a tiny tube of glue, a sheet of stickers, a sheet of magnets and a cloth to clean your whiteboard.

I like that you can tidy everything away into the easel – no random marker pens floating around to tempt Tori’s pesky little brother into colouring in the radiators again!

The rear side is a dry-wipe magnetic whiteboard which was the first thing Tori tried out – scribbling a rainbow onto it with the four bright marker pens and then decorating it with the set of Fairy magnets provided. She was a little upset that the bottom half of the magnet sheet had been bent in transit but five minutes under a heavy book soon had Tinkerbell’s legs nice and flat again. There was no need to squeeze the magnets back in at the end of her play either and risk more bending – she just stuck them to the whiteboard (and later, the fridge) for safe-keeping.

I have a whiteboard in the kitchen for scribbling notes and reminders on and she is always asking if she can write her name on it – now she has one of her own, with much prettier coloured pens than me too! The cloth provided wipes the marker off really easily and any she got on the body of the easel in her excitement washed off just as easily with a baby wipe.

Next, Tori turned the easel round and unclipped the activity book. It took her a few attempts to master the art of the clip but she quickly got the hang of it and shouted at me if I dared to intervene.

She picked out a page with a maze on it first, and though she hasn’t quite reached the age of understanding mazes she loved the pattern it made and happily set about colouring it in with the crayons.

It was here that we met our first issue with the 5-in-1 easel. It does have foam pads on the bottom but whenever Tori tried to colour, the easel would slide away from her across the table until it hit the wall behind. Luckily they only have a small table in their room, so she could still reach but it was a bit frustrating for her.

Soon, I could put off the inevitable no longer, Tori wanted to paint. She adores painting and happily busied herself choosing a picture whilst I got some water in a glass for her and opened the paint set. Painting kept her quiet for absolutely ages. It was lovely.

Tori experimented with the stencils a bit, but the easel sliding away across the table and her inexperience made it hard and she soon lost interest – I think she’s a bit too young for them just yet though she was very eager to try them out at first.

She loves stickers and happily decorated another page with them before going on to give herself a few as ‘well done for doing pretty painting’ rewards.

Flicking through the activity book, we found one of the cut out and play pages. Tori really wanted to cut it out herself but struggled to make the safety scissors work on the thick quality paper so I had to fetch a sharper pair and help her. She still had good fun sticking the characters onto the scene she had painted though.

Once she had finished, she was happy to help me fit everything into the drawer (it was a bit like Tetris, but we managed it!) and fold the easel up to store away until the next day. Much less faff than when she usually does colouring in!

The activity book has everything from mazes and dot-to-dots through to the cut out and stick scenes and plain colouring pages so would appeal to a fairly wide age group. Tori is 3 and a half and loved it, even though she’s not quite ready for things like stencils – for a child of four or five though, it would be perfect! Priced at £15 and comprising of so many bits and pieces, it’s good value for money and will provide hours of fun.

Check out Disney Store UK’s website for more great toy ideas for kids of all ages – there’s something for everyone.

I was sent one ‘Disney Fairies 5-in-1 Easel Activity Set’ by Disney Stores UK in return for an independent review on my blog. No other payment was offered or received. The ‘Easel Activity Set’ can be purchased in any Disney UK store or on their website, linked above.