Snowed Under by Jen Greyson 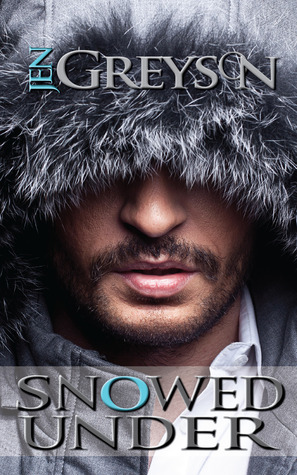 Where Did I Get It? Very kindly received for review from the author. Available on Amazon Kindle for you though 🙂

Cassidy has life all figured out. She’s one semester away from finishing her degree and then she’s off to save Mother Earth. But first, she has to stop the planet-murdering Whetman Logging.

Teague Whetman brought MIT home to the family logging business in Alaska. They’re high-tech artesian. But even his advanced technology can’t handle Cassidy’s handcuffs when she chains herself to the main saw.

When a late-Spring storm hammers the little town of Bear Ridge with eighty inches of snow, Teague and Cassidy must put aside their animosity to battle a power outage, crazed wildlife, and their own attraction.

Not even on the ground three minutes and I already missed San Diego.

My Review: Charmingly slow burning but steamy, Snowed Under, was a quick read that helped to pass a quiet Spring evening in a highly entertaining way.

I adored Cassidy’s character – she was easy to relate to in many ways, especially as one who always dreamed of doing something special to save the planet as a kid (never managed to go veggie though, sausages just taste way too good to give up…). She’s stubborn and knows what she wants and how she’s going to get it until Teague turns up and throws a spanner in the works.

I loved their faltering relationship as they tried to find their feet around each other – polar opposites and not just because of where they live – it leads to a hot and cold relationship that gives you so many almost moments that you can’t bear to stop reading because they haven’t got together and they really really have to! There were plenty of ‘JUST KISS HIM/HER’ moments that agonisingly didn’t quite happen leaving you wanting more.

All of this surrounded by the beautiful but deadly landscape of an Alaskan storm – complete with crazy raging moose which, quite frankly, sound more than a bit terrifying. The concept of so much snow blows my mind being from the UK where the whole country collapses into despair at the sight of three inches of the white stuff – I can only imagine the crushing snow-silence that it would bring and how weird it must have been for Cassidy who was as alien to it as me.

Snowed Under had a whole lot of excitement in its few pages – both in the adventure and the raunchy sense of the word. The balance was just right between story and steam too, I cared about the characters and their story, I knew where they were and why and it wasn’t all just to link together the racy bits – something that Adult fiction often falls down on.

I really enjoyed Snowed Under and I am excited for the prequel Undertow which is apparently coming out in Autumn 2014 – not too long to wait!

One thought on “Snowed Under by Jen Greyson ~ A Review”