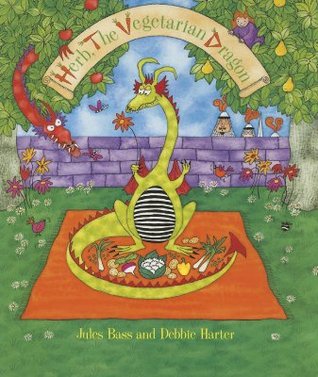 Where Did I Get It? Tori& Arthur were given a copy as a gift.

Blurb: The dragons in the forest of Nogard like nothing better than raiding Castle Dark and carrying off princesses to eat – all except one. Herb is at his happiest tending his vegetable patch, for Herb is a vegetarian. So it is unfortunate that he is captured by the castle’s knights in armour. Treacherous Meathook and his dragon cronies will only help Herb if he agrees to eat meat – will he give in to their blackmail? Jules Bass’s lighthearted story combines with Debbie Harter’s jaunty illustrations to make this a hilarious picture book that also offers young readers plenty of food for thought.

Every dragon in the forest of Nogard was a meat-eater. Meathook was their leader.

My Review: I am a big fan of dragons and this is something I try to encourage in Tori and Arthur too, so when they were given a copy of this book I was quite excited to share it with them.

The story is quite straight forward but still exciting with the threat of the dragons eating the knights and then the fear that Herb is going to be fed to the castle alligators later on. It kept Arthur’s attention throughout, despite being quite wordy in places – I think this is partly down to Debbie Harter’s illustrations. Even when he had to listen to lots of words, there was enough in the pictures to keep him focused and entertained.

There are obvious morals being put across in the story, such as tolerance for others and the topic of vegetarianism is brought up in a way that is easily accessible to children without being judgemental or preachy. (In fact, the whole book is officially approved by The Vegetarian Society!!)

I particularly liked that it didn’t condemn either the meat-eaters or the vegetarians in the story – neither was made to change their dietary habits (beyond an agreement to not eat all the Princesses and Knights – wild boar were still on the menu though!) and the end resolution was formed through respect and agreeing to disagree by finding a compromise. Peace and harmony was found not through anybody being defeated, eaten or bullied into changing but through talking things through and accepting that everybody is different.

A great book that is good to share and a bit different to a lot of other picture books that we have read, Herb, The Vegetarian Dragon, has become a bit of a favourite in our house.