New year, new book in the House of Blog Book Club. This time it’s a new release – from the 1st of January, in fact, and one I was looking forward to reading – thanks for choosing it as this month’s read, Fran! 🙂

The Life I Left Behind by Colette McBeth 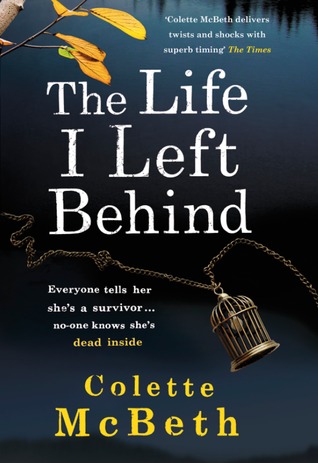 Where Did I Get It? I have kindly received a copy for review from the publisher via bookbridgr.com. The Life I Left Behind is available on Amazon.com

Blurb: I’m the only one who knows the secrets her friends have hidden, the mistakes the police have made.

I’m the only one who can warn her she’s still in danger.

I know exactly who attacked her.

He’s the same man who killed me.

The first thing that strikes him is the cold. When he comes in from the garden he’s always greeted by a hot blast at the door, like running into a band of warm cotton wool. Except today there’s no cotton wool.

My Review:
I thought I was done with books that involved a narrator who was recently deceased watching over the people they left behind. It was fun in The Lovely Bones but it has been done and done again and the last one I tried (The Dead Wife’s Handbook) just bored and annoyed me to the point where I put it down, so when I picked up The Life I Left Behind and realised it had an element of that in it, I was dubious. Thankfully, The Life I Left Behind did it very well and I was neither bored, nor irritated.

The story is told from a couple of narrative perspectives, and only one of those involves a dead person, which means you are constantly seeing different sides of the situation, drip feeding you clues but never revealing so much that you work it out (or at least, I didn’t until quite close to the big reveal).

Melody physically survived a vicious attack but mentally closed herself off from life afterwards believing that everything she believed in couldn’t be trusted after someone she considered a friend almost killed her. If she could be so horribly wrong about that, how could she trust herself with anything else? Then Eve is murdered in the same way and dumped in exactly the same place and suddenly everything is wrong again.

It doesn’t feel right that the same man would do it over again.

The Life I Left Behind kept me on my toes and I raced through it once I got started. I didn’t want to stop – I loved how human the characters were, I could relate to them and desperately wanted there to be a happy ending for Melody and at least justice for Eve.

A real page turner, filled with little details that built up the world around the characters beautifully, I enjoyed The Life I Left Behind immensely although I will confess to having to read the ending twice. I’m just not sure if what I thought happened, happened, or if I’m misreading it or reading too much into it. I don’t want to leave spoilers and I can’t really explain myself without doing that. I’ll just have to wait for a friend to read it so I can talk about it with them without spoiling anything!

3 thoughts on “The Life I Left Behind ~ Book Review (#HoBBookClub)”