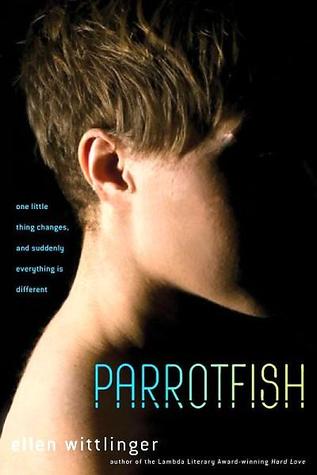 Where Did I Get It? I bought myself a copy to join in with the LGBT Readathon.

Blurb: Angela Katz-McNair has never felt quite right as a girl, but it’s a shock to everyone when she cuts her hair short, buys some men’s clothes, and announces she’d like to be called by a new name, Grady. Although Grady is happy about his decision to finally be true to himself, everybody else is having trouble processing the news. Grady’s parents act hurt; his sister is mortified; and his best friend, Eve, won’t acknowledge his existence.

On top of that, there are more practical concerns–for instance, which locker room is he supposed to use for gym class?

I could hear Mom on the phone in the kitchen gleefully shrieking to her younger sister, my aunt Gail.

My Review: I knew when I decided to take part in the LGBT Readathon that I wanted to make sure I read at least one book that involved the ‘T’ (Transgender) because aside from the odd moment of cross-dressing, I couldn’t think of a single book I’d ever read involving a transgender character. Not a single one.

Somebody recommended Parrotfish on their blog (I have no idea who though, sorry) and I decided to go for it and I’m very pleased I did.

Parrotfish is aimed at a fairly young teen audience and is a very easy read – Grady is a very likeable character who feels like an honest narrator throughout.

The whole book is very thoughtful and reflective – covering all sorts of aspects of ‘coming out’ as transgendered that others may not have considered, such as which changing rooms would you use at school, or even which bathroom? Especially when you are living as a boy but still have the physical features of a girl which, inevitably, involves a certain cycle that boys don’t have to endure – do you have to use the girl’s bathroom for that week every month and the boy’s the rest of the time?

Whilst the story on the whole covered everything from acceptance to bullying, it did all feel a little fast. I think it was needed in the confines of the story, in order for it not to become too long and boring for the intended age group, but some of the people around Grady seemed to switch from non-acceptance to acting as if nothing had happened a little to quickly for it to sit well with me.

That aside, it makes for a sweet story of self-discovery and certainly covers the bases of what feelings and experiences transgendered people must go through and, although it is primarily aimed at a younger audience than me, it really makes you think and helps towards understanding a little of other people’s lives and feelings.

Well worth a read and definitely one I am going to keep on the bookshelf for my kids to discover later.