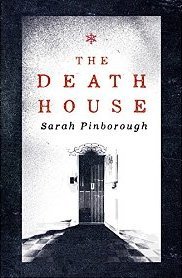 Where Did I Get It? I borrowed it from Liberty’s library!

Toby’s life was perfectly normal… until it was unravelled by something as simple as a blood test.

Taken from his family, Toby now lives in the Death House: an out-of-time existence far from the modern world, where he, and the others who live there, are studied by Matron and her team of nurses. They’re looking for any sign of sickness. Any sign of their wards changing. Any sign that it’s time to take them to the sanatorium.

No one returns from the sanatorium.

Withdrawn from his house-mates and living in his memories of the past, Toby spends his days fighting his fear. But then a new arrival in the house shatters the fragile peace, and everything changes.

Because everybody dies. It’s how you choose to live that counts.

“They say it makes your eyes bleed. Almost pop out of your head and then bleed.”

My Review: British Books Challenge 2017, Book Two – and yes, the last one was by Sarah Pinborough as well. I appear to be accidentally featuring her this month!

The Death House broke me. I was expecting to shed a tear or ten because Liberty said it made her cry when she read it and Liberty doesn’t cry at anything. I was not expecting, however, to do half-a-box-of-tissues worth of crying. So thanks for that, Lib 😛

Set in a dystopian future that didn’t feel all that far away, where blood tests through school are just a routine you go through, children found to be carrying the ‘Defective’ gene in their blood are sent away to live in The Death House, somewhere across the sea. They are ripped unceremoniously from their families, never to contact them again, and collected together to live out the remaining days, weeks, months of their lives in a draughty old house, on a draughty old island in who-knows-where. They only have each other, the blank-faced and terrifying Matron, a selection of nurses and a few bored-looking teachers for company – along with the undeniable knowledge that they are going to die, probably soon and in a way that probably isn’t pretty.

A bittersweet story of life in the Death House, there are all the things you would expect from a group of kids aged between 10 and 16 living together 24/7 – lust, jealousy, fear, fighting, friendships and heartbreaks. Sometimes it almost feels like a boarding school story but there is always that lingering horror of the Sanitorium on the top floor and the memories of the kids who used to sit at their tables who got sick and then never came back.

This tension ripples through the background, steadily building as the book continues until the final crescendo where it breaks your heart and then kicks it around a bit.

Mysterious and dark, The Death House doesn’t answer all the questions it causes you to ask but it tells you just enough for it not to matter. All that matters are those young lives inside the walls, in a world that is suddenly too small for them and infinitely too short.

I have a feeling The Death House is going to haunt me for a while – it has certainly left me with a book hangover of epic proportions, that’s for sure.