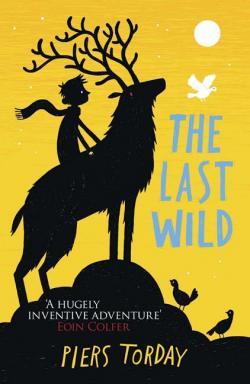 *Our stag,* whispers the General.

A stag. I had heard of them, but to see a real one, right in front of me – enormous, dark brown, twice the height of any other animal here, with wide horns, jabbing and curving in all different directions. He takes a few steps towards me and all the other creatures part to make way for him, like he’s the king.

He lowers his head. I flinch back against the rock, trying not to breathe or touch him. But he doesn’t gore me. He sniffs me. He sniffs my hair and face and hands, all over, inhaling every inch.

The Last Wild by Piers Torday

In a world where animals no longer exist, twelve-year-old Kester Jaynes sometimes feels like he hardly exists either. Locked away in a home for troubled children, he’s told there’s something wrong with him. So when he meets a flock of talking pigeons and a bossy cockroach, Kester thinks he’s finally gone crazy. But the animals have something to say. And they need him. The pigeons fly Kester to a wild place where the last creatures in the land have survived. A wise stag needs Kester’s help, and together they must embark on a great journey, joined along the way by an overenthusiastic wolf cub, a military-trained cockroach, a mouse with a ritual for everything, and a stubborn girl named Polly. The animals saved Kester Jaynes. But can Kester save the animals?