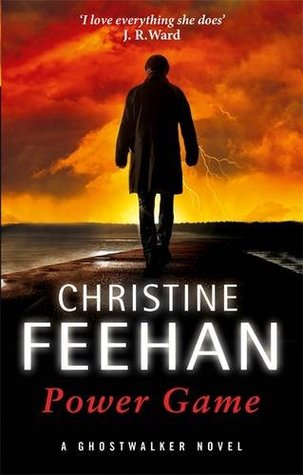 Where Did I Get It? I received a copy from the publisher in return for an honest review

Blurb: #1 New York Times bestselling author Christine Feehan is “one of the best storytellers around” (RT Book Reviews). Find out why as two lovers surrounded by greed and corruption discover there’s no telling whom you can trust—or who will come out on top…

When members of a United Nations joint security force are taken hostage by radical terrorists in Indonesia, Captain Ezekiel Fortunes is called to lead the rescue team. Part of a classified government experiment, Zeke is a supersoldier with enhanced abilities. He can see better and run faster than the enemy, disappear when necessary and hunt along any terrain. There are those in the world willing to do anything for power like that…

A formidable spy genetically engineered to hide in plain sight, Bellisia rarely meets a man who doesn’t want to control her or kill her. But Zeke is different. His gaze, his touch—they awaken feelings inside her that she never thought possible. He’s the kind of man she could settle down with—if she can keep him alive…

Bellisia Adams stared at herself in the mirror. Beside her was JinJing, a sweet woman, unaware that the man she worked for was an infamous criminal or that the woman beside her was no more Chinese than the man on the moon.

My Review: I jumped in to this novel having not previously read any of the other GhostWalker novels however this wasn’t a problem, it worked just fine as a stand alone. Enough background was given that I knew the background story of the GhostWalkers well enough for the story to make sense despite no prior knowledge.

Indeed, if anything there was a little too much background because at times I felt it got a little repetitive when talking about the GhostWalker programme and its creator ‘Whitney’. I imagine if you had read previous books you may have got a little voice in your head saying ‘I know this, get on with it’ on more than one occasion. I got it once or twice and I’ve only read this one!

I really liked the lead female character, Bellisia, as she was sassy, self-sufficient, strong and sexy. Her octopus DNA gave her super-cool abilities which lended perfectly to the swamp setting of the story – there was a lot of swimming and squeezing into small places involved. I just hated the fact that as soon as she was with Ezekiel, she became sort of timid and placid whenever he was present, she lost all her shine in awe of his ‘manliness’ and that really turned me off.

Ezekiel was not my favourite character, his GhostWalker abilities were never really gone into and I was a left a bit confused as to what they were. I only knew that he sometimes got into a super-rage and had to channel it out, usually through violence otherwise bad things happened (it got very hot at one point – would he explode? Who knows?)

I think he was supposed to be rough around the edges in a sexy way – tough because he had to be but tough for all the right reasons – but it didn’t really work for me. Also, his inability to call Bella by her name infuriated me by the end – he always talked to her in a way that felt simpering and patronising, overusing ‘baby’ and ‘honey’ which went entirely against his character the rest of the time. It just didn’t sit right, for me at least.

The story varied from political warfare and human rights, to some super racy scene full of sexual tension (and sex) and it had moments that were really tense and exciting. It was quite fast paced once you waded through the first two chapters that introduced Ezekiel and Bellisia in more detail than I think was really required – you would have learned almost all of what was said there later on in the story anyway.

Overall, it kept my attention enough to keep reading but didn’t hook me in enough to go and find the rest of the series. A good quick read if you were looking for something saucy with a sci-fi/paranormal twist and a bit of action thrown in.