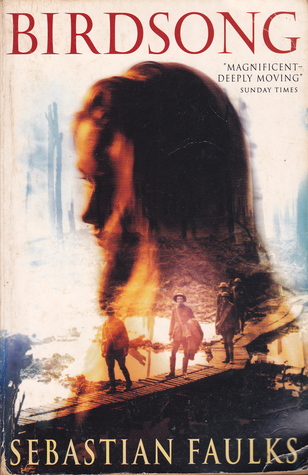 Jack, Weir and Eavans were flattened against the side wall by the blast and escaped the path of debris. Jack saw part of Turner’s face and hair still attached to a piece of skull rolling to a halt where the tunnel narrowed into the section he had been digging. There was an arm with a corporal’s stripe on it near his feet, but most of the men’s bodies had been blown into the moist earth.

Published to international critical and popular acclaim, this intensely romantic yet stunningly realistic novel spans three generations and the unimaginable gulf between the First World War and the present. As the young Englishman Stephen Wraysford passes through a tempestuous love affair with Isabelle Azaire in France and enters the dark, surreal world beneath the trenches of No Man’s Land, Sebastian Faulks creates a world of fiction that is as tragic as A Farewell to Arms and as sensuous as The English Patient. Crafted from the ruins of war and the indestructibility of love, Birdsong is a novel that will be read and marveled at for years to come.