I’ve been in a bit of a slump for the last two months – I just scraped through my NEWTs and changed up my September TBR more than once to fit in some easier reads just to hit my target – hopefully October is going to be a bit better!

As a quick roundup – in August I completed 7 books for my NEWTs readathon and 1 extra audiobook. I will talk about my NEWTs books properly in a couple of days, but the audiobook was The Name Of The Wind (The Kingkiller Chronicle, Book 1) by Pathrick Rothfuss. At over 25 hours long, this was a proper epic and I really enjoyed it. It’s a slightly different style to other epic fantasy books I’ve read in that the story is being told by the main character but not in the usual sense. The story is being narrated to another character for them to write it down, so periodically you are in the present day, with interactions between characters in the inn, but the rest of the time you are listening to the story being told, along with the chronicler. I really liked this quirk and I enjoyed the epic journey of Kvothe’s childhood and early teen years so much that I have bought the second book to listen to. (Hopefully the third one will be released soon!!!!)

In September I read:

Rosie Loves Jack by Mel Darbon, which was so fabulous I need to do a proper review of it on its own! (5*!)

As Delightful As A Carrot by Keris Stainton, 3.5*, this was a cute little book of things the authors two sons came out wirth when they were young. It made me laugh out loud quite a few times and reminded me of several classics my own kids came out with (and still do sometimes!)

American Gods: 10th Anniversary Version by Neil Gaiman, 5/5* (audiobook), another epic listen (because I seem to be having a phase of them!) – this was lond, winding, mysterious, magical, creepy, funny, and all sorts of other things in between. It made me cry like a twerp whilst I was washing up, and it made me snort-laugh in a very unladylike manner more than once. Not quite like any other Gaiman books I’ve read, but just as brilliant. (The American road trip feel and the sheer scale of it made it feel quite Stephen King-esque at times, actually.)

Sanctuary by V. V. James, 5*, a great murder-mystery with a magical twist. Set in an alternative America where witches are real, but not hugely common and not entirely unpersecuted, a young and popular high-school boy dies at a party in what appears to be a tragic accident, until someone steps forward with a phone video claiming it is evidence of wtitchcraft. The penalty for murder by witchcraft is death, and the girl accused of using it is the daughter of a witch but claims to have no magical powers of her own – there is a lot on the line in the case and emotions are understandably high. This book looked enormous but read very quickly – fast paced and easy to read, I loved the twists and turns and the challenge of figuring it all out (which I got wrong because I’m rubbish at this sort of thing).

Furious Thing by Jenny Downham, I will be posting my review for this on the 7th as part of the Darkroom Tours Instagram tour. But it was fab, I’ll tell you that much! (5/5*)

So, on to October! At Smut Club we are using the NEWTs prompts to choose our books (a different subject each month) and this month it is Astronomy so the prompts were: Moon on the cover/in the title, Word ‘night’ in the title/series name, and Read a Sci-fi. I have chosen one book for each prompt, pulled an audiobook out of my jar, I have another one to read for an Insta Tour review and picked one extra book as an overflow plan in case I get enthusiastic and finish everything else. 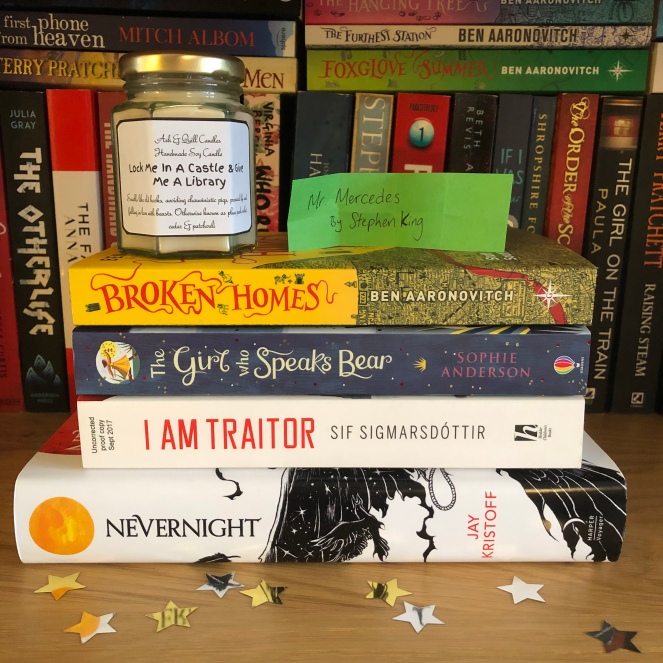 (Awesome candle featured comes from Ash & Quill Candles and smells divine – I will tell you more about them later in the month, too!) 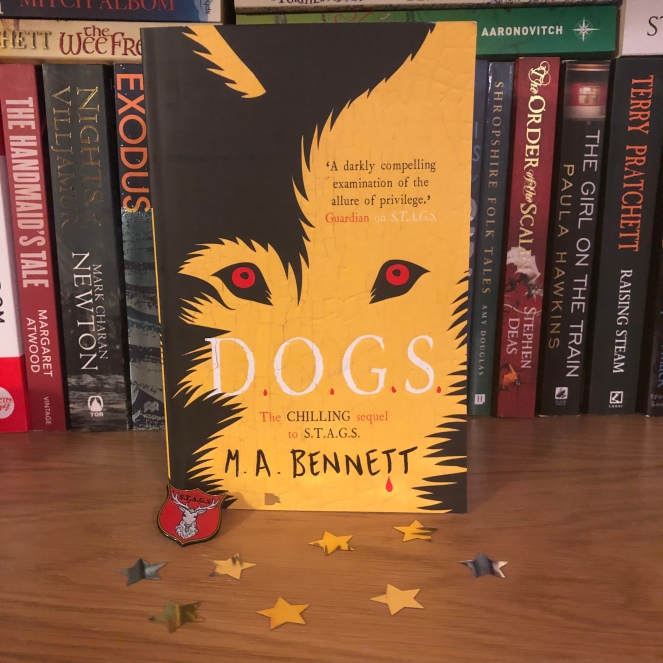 The Girl Who Speaks Bear has a moon on the cover, Nevernight has the word ‘night’ in the title (duh), and I Am Traitor is a science fiction book – they are my Smut Club/prompt choices, and then I pulled Mr. Mercedes out of the jar (I have actually started this one before and abandoned it, but I can’t remember why. Time to give it another try!) D.O.G.S is the sequel to S.T.A.G.S which I loved and I am very excited to return and see what happens next.

I still haven’t read Broken Homes despite it being on every TBR since August, so I’m putting it in again in the hope that I finally make it!!

If by some reading miracle I finish all of those, I will start War Girls by Tochi Onyebuchi which is another tiur book coming up in early November.

What are you planning to read this month?