A Book Whose Main Character You Want To Marry

This one’s eeeeeeasy!! I’m a little in love with a great many book characters but if I had to choose just one it would have to be Jenks from Kim Harrison’s The Hollows Series.

This is quite possibly my favourite series of books, all great fun Urban Fantasy romps with a brilliant female protagonist who kicks some serious butt but also quite regularly falls flat on her face or says completely the wrong thing and looks like an idiot. She is not the character I want to marry, but she’s still pretty awesome. I may have a slight girl crush on her.

Anyway, back to Jenks. The first thing I should point out is that he is a pixie. Okay? I’ll just throw that out there for you to digest – I want to marry someone who is all of about two inches high.

He is witty, sarcastic and highly strung – all features that regularly result in me laughing out loud whilst reading. But despite his often sharp tongue he is fiercely loyal to his family and friends, great with a sword (think extra pointy toothpick), charming and incredibly good-looking…when you get close up enough to see him properly that is.

His loyalty and strength of love for his family is one of his greatest features I think. It shows throughout the series but in the Black Magic Sanction it positively glows out. I don’t want to give anything away but he had me sobbing my heart out. On a train. (The guy opposite me looked really uncomfortable – I’m not sure my attempts to smile reassuringly at him between pages helped much.) 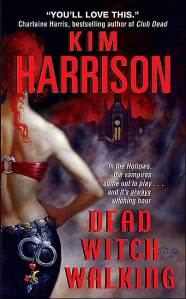 The Hollows series (also called the Rachel Morgan series) is a series of mystery novels in an urban fantasy alternate history setting by Kim Harrison that take place primarily in the city of Cincinnati. The city itself is mostly separated in two parts: The main part of the town (usually called downtown) and the enclave on the opposite side of the Ohio River nicknamed “The Hollows”. Most Inderlanders in Cincinnati live on “The Hollows”, although exceptions exist on both sides.

Novels in the series are told in the first-person point-of-view of Rachel Morgan, a detective witch who works with local law enforcement agencies and faces threats both mundane and supernatural in origin. The series also focuses on Rachel’s relationships with her partners, a living vampire and a pixy, as well as her personal relationships with males of different species.

Hang on a minute. Nine?? EEEE! There’s a new one coming out this year *bounces up and down* YAY!! *runs away to preorder it*