The other day I got an email asking if I wanted to do some more baking.

I’m never one to turn down cake – especially not the chance to try something new – so I said yes please and immediately went about finding a new recipe to try on the BakingMad.com website.

Now I had kindly been sent a few baking goodies to help me on my way and one of these was a bottle of Almond Flavouring which is one of my favourites. I decided that I really wanted a recipe that used this so went about finding a suitable one and as luck would have it, the second thing listed on the new recipes for cupcakes page was ‘Amaretto Pineapple Cupcakes‘.

I looooove Amaretto and just happen to have half a bottle in the drinks cupboard so my mind was quickly made up. I did however decide to omit the pineapple topping because, as divine as it sounded, it involved fresh cream and pineapple – neither of which I had. Instead I thought I would use the tube of blue icing I had also been sent to decorate them at the end.

It was a really simple recipe to follow (the only thing I did differently was to add a bit of pink food colouring to the mix because I like funky coloured cakes) and the cakes rose more evenly than pretty much any batch of cupcakes I’ve ever made before so I will definitely be using the recipe again (without the booze if they’re for kids, obviously…)

Once they were cooled I set to work with the Designer Icing which was far easier than faffing with a piping bag and a much bolder colour than I have ever managed to produce in my own icing endeavours. I tried out all three piping nozzles and added some sprinkles and in the end had a very bright batch of cupcakes which tasted divine.

I even let the kids have half of one each and was very disappointed when they gave them the thumbs up. Arthur was especially enthusiastic – I can see I’m going to have to keep guard over my Amaretto when he gets older… 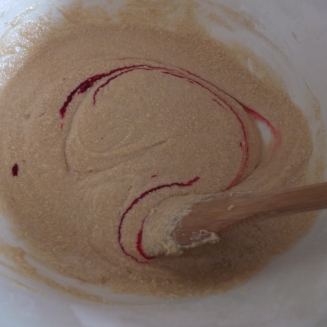 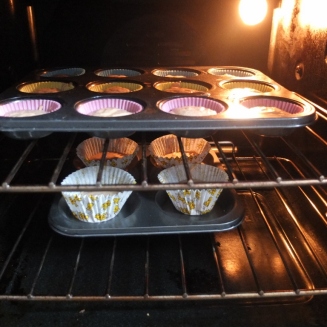 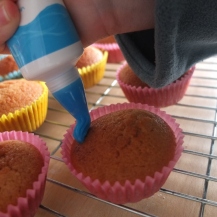 One day I think I might try making them with the pineapple and whipped cream topping but for now, I am happy with my bright blue icing!

DISCLAIMER: I was sent a small selection of baking products and a recipe book in return for an honest post including links to the Baking Mad website. All opinions and images are my own and no other payment or incentive was offered – I meant it when I said I can’t say no to cake.