A Clockwork Heart by Liesel Schwarz 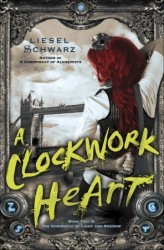 Series: The Chronicles of Light and Shadow (Book 2)

Where Did I Get It? Kindly received for review from NetGalley

Summary (from Goodreads): FOR BETTER OR CURSE. That might as well have been the wedding vow of Elle Chance and her new husband, the ex-Warlock Hugh Marsh in the second book of this edgy new series that transforms elements of urban fantasy, historical adventure, and paranormal romance into storytelling magic.

As Elle devotes herself to her duties as the Oracle—who alone has the power to keep the dark designs of Shadow at bay—Marsh finds himself missing the excitement of his former life as a Warlock. So when Commissioner Willoughby of the London Metropolitan police seeks his help in solving a magical mystery, Marsh is only too happy to oblige. But in doing so, Marsh loses his heart . . . literally.

In place of the flesh-and-blood organ is a clockwork device—a device that makes Marsh a kind of zombie. Nor is he the only one. A plague of clockwork zombies is afflicting London, sowing panic and whispers of revolution. Now Elle must join forces with her husband’s old friend, the Nightwalker Loisa Beladodia, to track down Marsh’s heart and restore it to his chest before time runs out.

Not all fairy tales end with Happy Ever After.

Some begin that way.

My Review: After reading book one of this series I was horribly disappointed – by the end it had shown oodles of potential and promise but only delivered any in the final chapters of the book. Thankfully A Clockwork Heart realised all of that promise and added some more magic of its own.

Steampunk with a touch of horror, Elle has finally found her feet as a character and no longer felt flighty and confused. A very good thing considering the situations she finds herself in – it’s never an easy thing when you drag your husband home to find his heart has been ripped out and replaced by clockwork.

Atmospheric throughout with a hefty smattering of Shadow fey amongst the steampunk and clockwork zombies, A Clockwork Heart was an exciting adventure that I couldn’t put down. Satisfying in itself but with enough of a cliff-hanger that I can’t wait for book three to be released – finally I can see that this series could well be the spark of the new beginning for steampunk that everyone was talking about.

2 thoughts on “A Clockwork Heart by Liesel Schwartz ~ A Review”