It was Caius’s birthday last weekend and I have been hatching a plan for a few months.

You see, one of my 101 things in 1001 days was to organise a themed birthday and I suddenly realised I was running out of birthdays before my deadline in April. Then I saw the Lakeland range of Doctor Who 50th Anniversary products and fell in love and knew what I wanted my theme to be.

I mostly managed to keep it a secret until the day, too. More or less.

I started out by making a selection of biscuits and chocolates on the theme before moving on to the main event – the Dalek shaped cake!

Now, the box of the Dalek mould said that it required at least an eight egg cake mix.

I think the most I have ever used in a cake before is four. After a quick research I discovered that you can work out your quantities by simply weighing your all eggs in their shells and then using this total weight as the guide for your sugar, butter and SR flour.

So that’s what I did and ended up with a massive amount of cake mix – stirred by my little helper, Arthur. 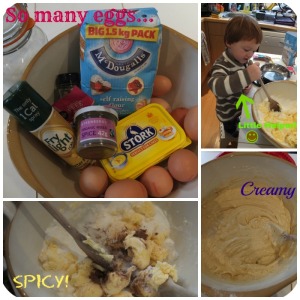 We added a heaped desert spoon of mixed spice, a couple of handfuls of raisins and a bag of white chocolate chips to the mix and then Artie grated in some fresh nutmeg, too.

I liberally sprayed the mould with butter flavoured spray oil, then poured in the mixture and popped it in the oven at 170ºC.

After 30 minutes I tried to cover the top with foil to stop it from overbrowning and managed to knock it over and pour a load of uncooked mix onto the foil and ruin the nice smooth top that had formed. I carefully poured the mix back onto the mould, put the foil over and desperately hoped it would be okay.

Then after about 75 minutes, I went to stick a skewer in to see if it was cooked through… and promptly EXTERMINATEd the Dalek across the oven (inside and out) and my hand.

After making the decision to laugh about this instead of cry, I text Caius (who was out for lunch with Arthur by this point) and asked him to buy replacement ingredients so that I could start again.

A few hours later, after an uneventful EGM at Pre-school, I was ready to start over and luckily managed to both cover Dalek Mark II with foil and get it out of the oven without throwing it everywhere. I think I must just have not put the mould down properly level the first time as it was quite stable second time around.

It took about 85 minutes to cook through in the end and came out of the mould really nicely – leaving only three of the knobbly bits in and these popped out perfectly individually and were simple to stick back on with melted white chocolate drops.

Once it had cooled, I set about decorating it. I will confess to using shop-bought buttercrem-style icing here because I can never get it to the right consistency for decorating properly when I make it.

First I stood the cake up and stuck it to the cake board with a generous splodge of icing.

Then I took a few spoonfuls of buttercream and added black food colouring to it to make it a dark grey colour and put this on the bottom and middle details, the base of the Dalek’s ‘eye’ and its ‘ears’.

Then I used plain coloured butter cream to cover the small details on the rest of the Dalek and added edible silver balls to these to add a more metallic look as well as texture.

After I had finished fiddling around with those (did you know they are REALLY bouncy when they roll off a table onto a hard floor?), I then rolled out some black icing to make the black stripes around the neck and sprinkled edible gold glitter flakes on its ‘ears’ to make them look flashy like when they light up.

Next I used edible spray paint to make the whole thing metallic – gold on the body and head and silver on the middle section.

Finally I used different coloured icing to make the eye-stalk, plunger and egg-whisk (or whatever their proper names are) and attached them to the cake using dried spaghetti sticks. 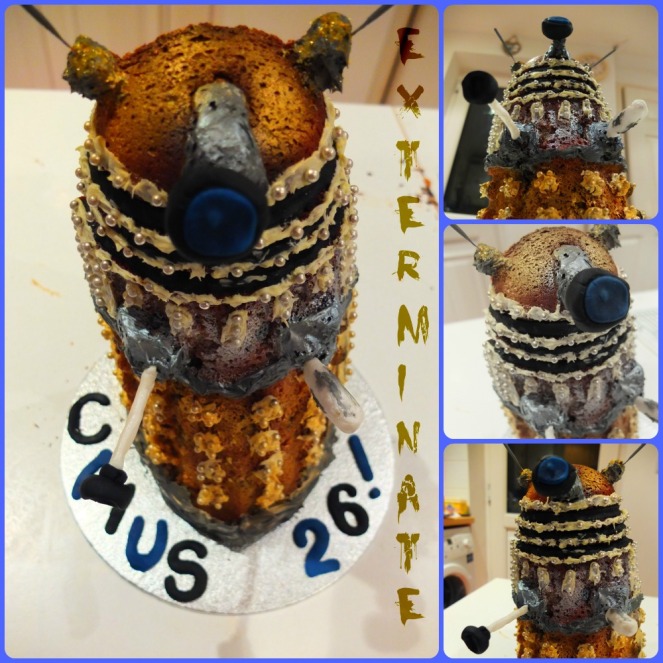 All of that done, I cut out some icing shapes to spell out the Birthday Boy’s name and age, added a couple of the chocolates I had made earlier and hey presto! Dalek Cake (Mark II)

I stuck a couple of indoor cake sparklers in its ears as candles when I carried it through, just to add some birthday sparkle.

To see the other fab entries in the Great Bloggers Bake Off, nip over to The Crazy Kitchen or Mummy Mishaps to check out the other blogs on the Linky.