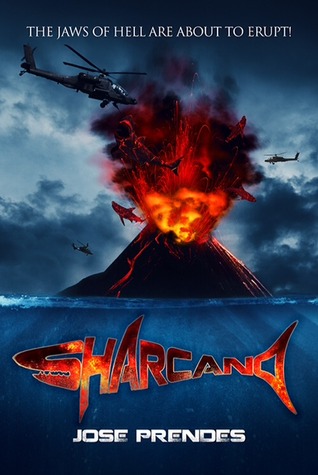 Where Did I Get It? Kindly received from NetGalley for review. Available on Amazon (follow link above)

Summary (from Goodreads): A burnt and half-eaten Megalodon shark corpse is found beached. A priest commits suicide. A previously unknown volcano rises from the China Sea and brings about a tsunami that destroys Shanghai. Yellowstone erupts after 640,000 years of silence. A pit in Nicaragua known as the “mouth of hell” begins violently spewing lava.

When reporter Mick Cathcart and marine biologist Agnes Brach set out looking for answers, they never expected to stumble upon the biblical end times. Yet when sharks made of molten magma start erupting from the volcanoes to devour everything and everyone in their way, how could they deny it?

With the help of a beleaguered priest and a billionaire industrialist, Mick and Agnes scramble to extinguish the volcanoes and blow away the lava sharks before the whole world burns to a cinder.

It sensed it before seeing it.

My Review: If you open this book expecting horror and science fiction of a serious nature then you are going to be seriously disappointed and hate it, however if you are wanting a fast-paced romp through a hellish apocalypse of amusing lava-shark related proportions then you will love it.

Much like the films that are of a similar nature, the overall storyline of this can only really be described as a bit silly. Sentient lava in the form of giant lava sharks that don’t particularly adhere to the laws of physics rapidly melting the Earth and everything on it into a puddle of ash is never going to be serious and inevitably leads to a few moments of giggling at someone being eaten/melted in a comically ridiculous way every ten pages or so. That said, it is very good silliness.

It keeps on throwing more situations at the wide cast of characters and they behave in believable human ways that make you fond of them even if you don’t much like their personalities. There is intrigue and mystery as everyone tries to figure out a way to halt the ever flowing lava and save the Earth as well as desperation, despair and tragedy.

I will confess to even shedding a couple of tears at tense moments – the power of playing on emotions and parent-child bonds is used with prowess – as well as laughing out loud and actually face-palming at the odd idiot moment.

I really, really enjoyed this book in the same way as I enjoy ‘popcorn’ movies that don’t require me to do anything but kick back and enjoy the show. I was a bit unsure at first but three chapters in and I was hooked, it was good fun and delivered exactly what the title promised cleverly and wittily without taking itself too seriously.

2 thoughts on “Sharcano by Jose Prendes ~ A Review”