The Dead Lands by Benjamin Percy 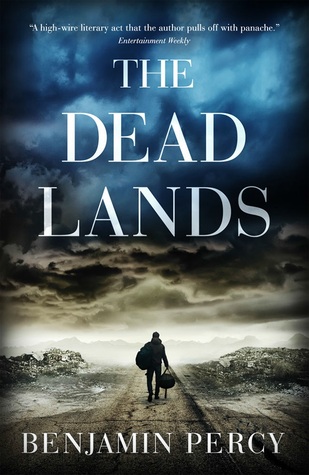 Blurb: In Benjamin Percy’s new thriller, a post-apocalyptic reimagining of the Lewis and Clark saga, a super flu and nuclear fallout have made a husk of the world we know. A few humans carry on, living in outposts such as the Sanctuary-the remains of St. Louis-a shielded community that owes its survival to its militant defense and fear-mongering leaders.

Then a rider comes from the wasteland beyond its walls. She reports on the outside world: west of the Cascades, rain falls, crops grow, civilization thrives. But there is danger too: the rising power of an army that pillages and enslaves every community they happen upon.

Against the wishes of the Sanctuary, a small group sets out in secrecy. Led by Lewis Meriwether and Mina Clark, they hope to expand their infant nation, and to reunite the States. But the Sanctuary will not allow them to escape without a fight.

She knows there is something wrong with the baby. She has known from the very beginning.

My Review:  The Dead Lands was a bit of a mish mash for me. I love a bit of post-apocalyptic fiction, it is probably my favourite type of horror novel, and this had that in spades but it just didn’t quite work in places.

At first it felt a bit Stephen King-esque with the futuristic post-apolcaypse set up and then suddenly there was a clockwork owl flying about spying on people and I began wondering if it was, in fact, going to be a steampunk novel.

Then a short while later someone got thrown across a room by apparent telekenesis. Magic now too?

I was confused. This confusion was not helped by the switching back and forth between characters, some of which were so forgettable I kept thinking they were a new person being introduced each time they were mentioned even though they weren’t.

The story did settle down and, aside from the owl, it happily became a science fiction fantasy novel and the magic felt less clunky than it did when it was first introduced, feeling natural by the end.

The theory of the nuclear fall-out creating giant mutants out of all the animals did take a little deliberate suspending of disbelief – they were a little too horror-movie-nightmare for me to be able to believe in which, as they were a rather large component of the story, took away a fair bit of my enjoyment.

There was however, one truly horrifying character in the book that made me genuinely shudder, and that was the Sheriff, Slade. He was creepy and perverse and seemed utterly evil in a way that was very human and believable. He was like the kind of super-twisted person you hear about in the news and can’t quite believe as you watch. Living in a tiny dark room with mannequins decorated with bits and pieces of his ‘favourite’ girls – hair, fingernails, teeth. Ugh. Makes me shudder just thinking about it.

The story itself, of a group of characters escaping their oppressive ‘Sanctuary’ in the hope of finding other survivors and a better place to live, fell a little flat. There wasn’t anything wrong with it per say, it just felt like the story was all about the journey and the ending was an afterthought rather than the reason they set off. I don’t really remember what happened when they arrived even though I’m fairly sure there was some kind of big showdown or other. It was totally forgettable compared to the journey they went on to get to that point.

Benjamin Percy’s main skill lies in his descriptive writing – the world was vast and well rounded. The places felt real and the atmosphere he created with his words was brilliant as the group of characters travelled across the country.

It’s just a shame his characters didn’t live up to the rich world they were living in and that the story wasn’t as well rounded as it could have been.