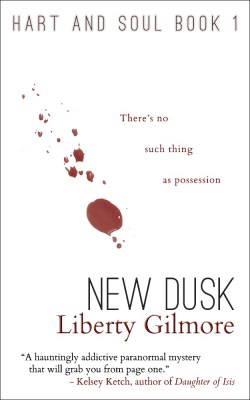 Where Did I Get It? I received a copy from the author in return for an honest review.

Blurb: Alf is roaring. Most people would mistake this for anger, but they don’t spend as much time around Demons as I do…

Cadence Hart has just six months on the job left. But six months might as well be a lifetime in the dangerous field of Deportations. Armed with a flaming sword and backed by Alf, her Demon partner, she’s the thin blue line between the Souls escaped from Hell and the living residents of the city.

Missing persons cases aren’t her usual line of work, but a young woman has disappeared in strange circumstances and Cadence is pulled off her regular duties to investigate. The girl’s parents think she’s possessed. Which is impossible. Only, from what evidence there is – it looks an awful lot like she’s possessed.

To solve the case, she’ll need the help of Matthew, a Soul expert. Matthew gained his expertise first hand – he’s been dead since before Cadence was born. But when their investigation unearths links to the devil-worshipping cult, New Dusk, they begin to realise that the case might be more than even they can handle.

Six months, I think as my head slams into the concrete ground. Just six months more of this.

My Review: Cadence lives in our world but in a time where, somehow, all the Souls in hell have broken loose and are causing havoc back on earth. Neither the living humans nor the demons of hell are particularly happy about this and Cadence is generally in charge of helping to send the troublesome Souls back where they belong (via the blade of her awesome flaming sword).

I love a book with a kick-ass lead character and Cadence is just that – she is passionate and hard-working and just the right level of sarcastic and socially-awkward. Her drive to work out what on earth is going on when everything the police can find seems to show that a missing girl has been possessed by some kind of demon is addictive and keeps you turning the pages to find out more.

New Dusk is fast paced and full of interesting characters. The idea of the Souls damned to hell being able to come back and cause havoc is a really interesting one and the way the populous has responded in the world of the book strikes true to how I imagine it would go. Understandably religions have had a shock in discovering that hell is truly real and they have adapted to this knowledge, some in quite frightening ways. The cult of New Dusk is horrifying and yet somehow understandable and that just adds to the hideousness of it – we all know people like the leader of New Dusk. They make your skin crawl whenever they smile.

The balance of Cadence and Soul-Expert Matthew is just right – they bounce off each other and seem to centre each other throughout the book. They both clearly have a lot of history and I am excited to learn more about them in the next book – for a start Matthew is a Soul himself which means he must have done something hell-worthy at some point before he died!

I really enjoyed New Dusk and I am looking forward to reading the next instalment of the Hart and Soul series – they are the perfect blend of urban fantasy and crime mystery and I’m hooked!

New Dusk is released TODAY (Friday 6th May 2016) so hop on over to Amazon and grab yourself a copy or nip over to the Prospect and Raven website to read the sneak preview if you need a bit more convincing!