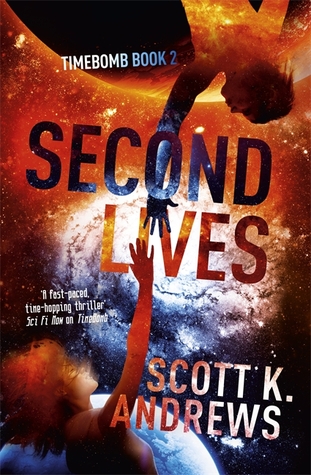 ‘She had risen that morning expecting an ordinary day, the latest in a long line stretching back for years and stretching ahead much the same.

But now she knew that there were no more days stretching ahead of her. Tomorrow she would die, either literally or figuratively. And whatever became of her – spirited away to safety, or blown apart in the street – today had been her last day with Kaz. Her last day with her beautiful boy, the last day of the childhood she had shared with him. The very last day of the kind of motherhood she had found more fulfilling than she would have believed possible ten years ago.

Because it had not been an ordinary day, not by any measure, and she couldn’t process it.’

It began when three people from three different moments in history discovered that they could travel through time when they clasped hands. But the mysteries surrounding them have only deepened.

There are risks to tampering with established events… timelines become snarled, histories become tangled… and one false move could destroy time itself!

Jana, Kaz and Dora have escaped from their mysterious enemy, Quil, wounded and scared. Taking refuge in a place outside of time, they devise a plan to change the past, altering Quil’s life so that she never meets them.
From the streets of Beirut in 2010 to the domed cities of Mars in 2155 and beyond, the three teenagers fight for their future, and that of all humanity, by trying to rewrite the history of the person who has sworn to destroy them.

What could be more complicated – and important – than trying to save the world? As their feelings for each other grow stronger, though, Jana, Kaz and Dora find themselves at the centre of a different kind of battle. And when it comes to matters of the heart, there can be no real victors.