2018 is chugging along and I decided it was about time I went outside and properly looked at our garden.

We’ve never really had a garden before so it’s all a big learning curve and we’re mostly making it up as we go along.

We know we want to make some changes – move flowerbeds round and stuff like that – but what we don’t really know is what’s already there, lurking in the neglected pre-existing beds. We also need to re-seed the lawn because it is very mossy currently so that’s going to be fun*.

As Spring keeps attempting to poke its head out of the covers (and then vanishing under a blanket of snow!), I am attempting to spot and identify the plants that are plants and rescue the ones we want to keep. 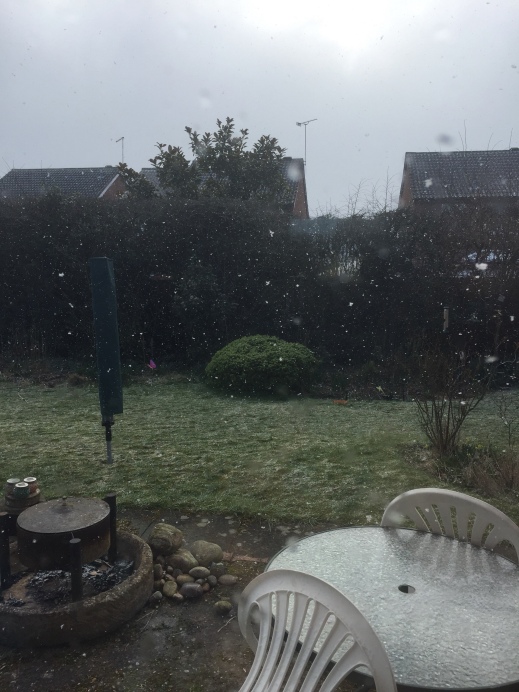 I don’t think the previous owner did much gardening beyond the bare minimum so the flowerbeds have a lot of grass and nettles and brambles in them.

In the flowerbeds, strangling the trees in the hedges, creeping across the lawn.

I am at war with the brambles.

I don’t mind there being some at the back of the hedgerow, they are a good food source for the birds and shelter for them etc. But I do mind them being so thick and well-established that they are throttling the trees in the hedgerow and causing great holes in the hedge where they’ve killed everything off. I also mind them being so enormous that the stems are thicker than my thumb and when I finally haul their length from the hedgerow, they are twice as long as I am tall.

I also mind when they manage to scratch me through multiple layers of clothing. I mind that quite a lot.

Large chunks of the hedge I am de-brambling are made up of hawthorn and holly trees so I am extracting prickles out of prickles.

So many spiky things. Why does gardening involve so many vicious plants? I thought it was meant to be a relaxing past-time? 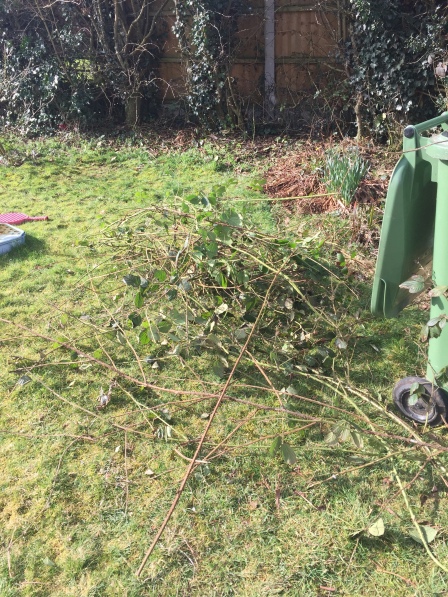 See that naked bit of fence? That was just a wall of brambles. It didn’t look like there was a gap in the hedge when I started!

It’s not all prickles and misery though (I actually quite enjoy the bramble battle to be honest, it’s quite therapeutic in a way) – flowers are poking their noses out and I’m hopeful that the ones I have relocated aren’t just all going to die!!

We have put up insect houses and bird boxes and mostly figured out what we want to do with the space – reshaping the flowerbeds, creating a wildflower area for bees and butterflies (nettles and brambles – this is the only place you can go where I won’t ruthlessly attack you, you have been warned!) adding a shed and maybe building a raised veg-plot too. I’d like to give growing edible stuff a go even though I have utterly failed at even growing sunflowers successfully over the last two years!

Now it’s just a case of putting those plans into action over the next few months. Along with just enjoying the freedom the space gives us, of course.

One thought on “The Bramble Battle & Start Of Spring”