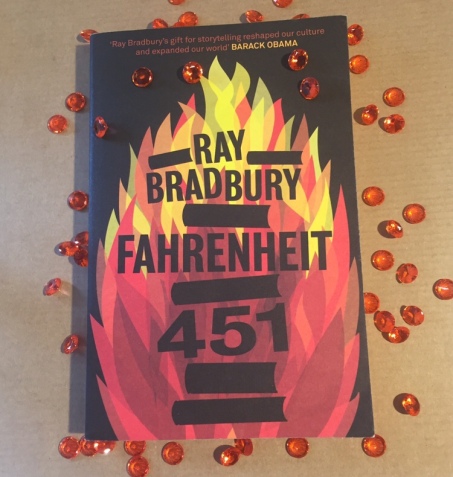 Blurb:
The system was simple. Everyone understood it. Books were for burning, along with the houses in which they were hidden.

Guy Montag was a fireman whose job it was to start fires. And he enjoyed his job. He had been a fireman for ten years, and he had never questioned the pleasure of the midnight runs or the joy of watching pages consumed by flames, never questioned anything until he met a seventeen-year-old girl who told him of a past when people were not afraid. Then Guy met a professor who told him of a future in which people could think. And Guy Montag suddenly realized what he had to do…

With the exception of Britannica, Fahrenheit 451 was new to all of us at Smut Club – one of those ‘I should read that’ books that we never actually picked up – and the general consensus was that we felt better for reading it. If nothing else SO MANY random references in other things suddenly made sense. (A bit like when we read Orwell’s 1984 a few months ago.)

Not everyone said they enjoyed it on the whole (I loved it) but there were moments that we agreed were powerful or made us think.

The thing that struck us all was how it could easily have been written yesterday, rather than in the 1950s. The near-future depicted in the pages was not unfathomable, sure there were no mobile phones but television screens that took up entire walls and showed endless ‘reality’ programmes? It didn’t feel dated at all.

You are rather thrown into this future world, there’s little building as such – you are just there in the middle of it straight away – cars turning into helicopters and vice-versa just happen as if it’s normal and a terrifying eight-legged mechanical ‘hound’ that can sniff out illegal books and stab you with a sedative needle if it catches you is not even blinked at by the characters. It’s just normal.

I loved that. Every little facet of the world that was just drip-fed to you filled me with wonder and kept me turning the pages.

The writing style is quite lyrical and we could see why it is often used in schools – so many metaphors and imagery that can be interpreted in a multitude of different ways. A couple of people found this a bit hard going but personally I enjoyed it – it made the story very visual for me and I almost felt more like I was watching a film than reading a book.

The dystopian idea of total control of others’ happiness and what they could and couldn’t consume was very similar to the themes in 1984 but I found Fahrenheit 451 much more effective and enormously easier to read.

Our next book is another ‘we should read that’ one – A Brief History Of Time by Stephen Hawking. A bit of a change of pace and style but I’m really looking forward to giving it a go!