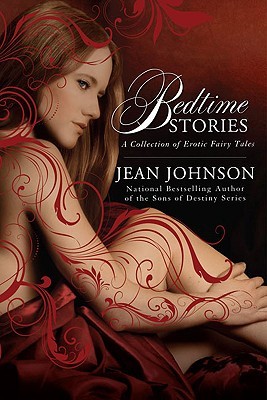 Jean Johnson sneaks between the covers of such classic fairy tales as Beauty and the Beast, Puss n’ Boots, and Sleeping Beauty, and refashions them into bedtime stories for adults only. With clever gender twists, hot fetishistic turns, other-worldly desires, and explorations into forbidden territories, Bedtime Stories reveals a veritable garden of sensual delights that gives new meaning to the term “happy ending.”

What We Thought: Honestly? We thought it was rubbish.

So, the fairy tales reinvented in the book were as follows:

I’m just going to go through the list I think, otherwise I don’t know where to start. Not everyone in Smut Club read all of the stories – some only read the first few and then lost the will to carry on, and others picked and chose a few to read after struggling through the first couple. Then a few of us mugs soldiered through the lot and slightly resent the loss of the time spent doing so.

Right, The Frog Prince, was first up and what a way to start. Technically, this story was not beastiality because at no point did the frog actually touch the girl… BUT… it was still a little ew. The story starts as it usually does except that the princess dropped her golden phallus in the river and not a ball.

You can see where this goes already, can’t you? So yeah, the frog prince (who is horribly cocky and self-centered) is ‘cursed to remain an ugly, unwanted creature until a beautiful woman demonstrates beyond a doubt that she associates me with pleasure’ and instead of the usual taking this as ‘she has to kiss me and mean it’ he decides it means ‘I must make her orgasm.’

This comes about by a lengthy ‘how to use your phallus’ lesson which is super awkward because A) he is a frog and B) he keeps saying things like ‘dip it in your womb’ and ‘your Dear Sweet Heaven Spot’.

One should really not dip anything in one’s womb. Not even if a talking frog tells you to.

Next up came The Courtship of Wali Daad – not everyone was familiar with this story to start with, I had to look it up but I had heard it before, and the original is pretty sweet. This version tried to be sweet and had a bit of potential to be steamy but just wasn’t quite up to it.

For a start it took a long time to get going and was just pretty boring for quite a while. And then the handsome prince sends the princess he has never met a magical golden phallus (yup, another one) with a message telling her that it is actually a replica of his own manhood and is enchanted so whenever she touches it, he will feel it and it will move under her touch as it it were real.

This one had potential – the idea of her arousing him from far away and him having to keep a straight face when he’s in public had all the ingredients of a saucy little tale – but the language used in the writing just killed it: ‘From the dimpled slit at the tip to the bulbous bollocks of its sack…’, ‘…her soft, wet, crinkly-haired netherlips.’

Netherlips is not our favourite word. In fact, we deemed it one of the least sexy words we’ve ever head. Unfortunately it seemed to be favoured by the author and so featured several more times throughout the book.

The Princess On The Glass Hill – a story exactly one member of Smut Club had heard of before. I had to Google it. This one I thought was kind of sweet in the end although we all agreed that the leading lady, Evanna, really needed new friends because hers were rubbish. The romance felt a little forced, possibly from trying to follow the constraints of the fairy tale, but it ended up with a fairly nice relationship at the end. It was set in a science fiction world and Evanna was a very scientifically minded character – it was quite fun seeing the discovery of the emotional, physical, sensual, romantic side of life through her scientific filter. With a bit more space and time, this could have been fleshed out into a reasonable romance, but as it is, it fell a bit flat.

I’m not sure if this was actually the longest story in the book or if it just felt like it was. It was apparently set in the universe of the author’s other book series but a new city. An underwater city with weird rules about girls having to have multiple husbands by the time they are X years old – enter Snow White and the first six ‘dwarves’.

Who are all gay with each other and married to her for marriage benefits and so that should she have to return to her home city (which she ran away from because politics), she’s still pure and safe to marry off to save the day.

Enter Prince Charming who was unnecessarily jealous about her six husbands and refused to marry her and save the day unless she divorced them and got them all kicked out of their marital home.

This story involved A LOT of politics and waffle about how they manage to live underwater, a bit of attempted murder and very little satisfying romance or sexy time. There was a lot of yawn.

It was also hideous because the word chosen to describe gay characters in this universe was ‘frothy’ which just felt horrible from the start. Also, every time it was used, it was written in italics as though it was whispered or somehow a dirty word. I was not the only one who hated it.

Moving on, we get to Sleeping Beauty which was one of our ‘favourites’ as a group. Another sci-fi one, this one had a nice gender-role reversal with the rescuing being carried out by the female character.

This one had a nice romance that felt a bit more genuine than any of the previous ones and it left a few of us feeling satisfied in their relationship, if not all sexed up by the ‘erotica’ bits. It had some fun and playful bits and was one we thought could be explored and tweaked to make quite a good story.

Next up was Beauty and the Beast which was another sci-fi based story which had potential. I will confess to chuckling my way through this one because there was a lot of the beast grumbling ‘I am not a beast, I am a genetically engineered human’ so as to get around the beastiality issues of sexy time with someone who has fur, cat ears and a tail. I have read enough shape-shifter romance to not be bothered by it – it’s actually often quite good – but the author was obviously concerned that her readers would be a bit put off.

This story was very Possessive Male Is Super Sexy which sometimes bordered on a bit too possessive and controlling for my liking – if I was the girl I’d have been tempted to run away and never come back after poking him in the eye – but I have read worse.

Almost there now, Puss In Boots came next and this was one of our favourites. Out of all of them, this one probably had the most potential to be a successful story if it was given a bit more time and space than allowed in the confines of a short story. As it is there were bits that felt a bit wham, bam, thank you Ma’am where characters met, magically agreed on everything (without even really speaking), set off on a grand adventure, got married(!), and took on the Big Bad Guy.

Another gender swap one, Puss was the girl which worked quite well. There were some giggles at bits for instance where the man married the girl in cat form and nobody blinked an eye at it – again, something I think would have been better with a bit more room for story-telling.

This story did have my favourite sex scene in though. Sex to the power of Pi – maths has never been so steamy! (Steamy is possibly pushing it, but it was fun.)

Aaaaand then came The King Who Heard A Joke which none of us were familiar with and got all of us who read it in a bit of a rage.

In the author note before this, she said she was trying to write something extra kinky. What she actually wrote was domestic abuse.

Spanking and the like is ONLY SEXY IF BOTH PARTIES CONSENT. If the person being spanked has not consented, it’s just abuse.

This story was just abuse. Until the last sentence when the wife came back to him and asked if they could try it again, except that felt like a really weedy attempt to make the rest of it all okay.

If this story had been any earlier in the book, I’d have stopped reading in disgust.

A few things I only touched on because otherwise it would have got repetitive though – the author’s language choices were dubious at best. Sexy scenes are not sexy when you use terms like ‘the spike of his flesh’, ‘netherlips’, ‘the turgid tip of his shaft’ etc etc.

There were also quite a few weird moments. Like someone ‘suckling’ on somebody else’s tongue. Is that sexy? We didn’t think that was sexy.

Every story has the title of the next story shoe-horned in somewhere as well in an attempt to link the collection together. In pretty much every case, it was super awkward and obvious and it wasn’t needed at all – the fairy tale link was enough to make it feel like a cohesive collection.

Also in most of the stories, one or other of the leading characters had some sort of ‘sex training’ be that an actual tutor or a willing handmaiden. It was all a bit weird.

Overall, we decided it wasn’t sexy, the writing wasn’t of great quality and the author’s treatment of her female and gay characters wasn’t great. I got all cross about the frothy thing and the abuse over again writing this and we read the book back in August.

We didn’t get our wish of a book as hot as the weather but it was an experience all the same. We don’t recommend picking this one up (although if you do want to read it anyway… I have a copy you are welcome to have!)

The Smut Club September read was The Owl Killers by Karen Maitland – diving into the Dark Ages this time! Will let you know what we thought of that after the Smut Club meeting.