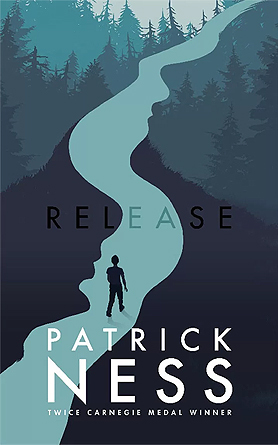 Where Did I Get It? I preordered myself a copy as soon as I heard it existed…

Blurb: Inspired by Mrs Dalloway and Judy Blume’s Forever, Release is one day in the life of Adam Thorn, 17. It’s a big day. Things go wrong. It’s intense, and all the while, weirdness approaches…

Adam would have to get the flowers himself.

His mom had enough to do, she said; she needed them this morning, pretty much right now if the day wasn’t going to be a toal loss; and in the end, Adam’s attendance at this little “get-together” with his friends tonight may or may not hinge on his willingness/success in picking up the flowers and doing so without complaint.

My Review:  Patrick Ness must drive his publishers potty. His books are so different from each other, and everything else, that he’s basically unmarketable. Brilliant, incredible, amazing – but impossible.

Release is a stunning coming-of-age novel that takes place over a single day (and took me a single day to devour) that portrays honest emotion at the chaos that is teenage life and cleverly twists this with a second plot of an altogether more mystical and unworldly story.

Adam is having, quite honestly, a pretty terrible day. Lots of little (and big) things are coming to a head, he’s tired and confused and, a teenage boy. It sucks when your boss is a creepy perv and your parents refuse to accept you for who you are. But it’s also kind of awesome when your boyfriend says he loves you and you’re going to a party in the evening. Swings and roundabouts.

Whilst Adam is dealing with Being-A-Teenage-Boy-Having-A-Bad-Day, the spirit of a girl from his school who was recently murdered has managed to get tangled with the mythical ‘Queen’ who lives beneath the lake and has  pulled her into the human realm. The Queen’s guardian, who has manifested as a seven-foot faun, has until sundown to get her back in the lake or she will die and the world will, most probably, burn and die also. The faun is also having A Really Bad Day.

These two stories wind around each other very cleverly and, although they are on totally different levels, echo each other beautifully throughout. I loved the way the stories twisted and blended but I could see how other people would hate it or just not understand in the slightest. Ness is an artist of Magical Realism and understated surreal situations – I adore it, I bet many people would hate it.

I didn’t want to put Release down from the moment I picked it up – in fact, I basically didn’t. I mostly spent the day doing things one handed whilst I read and I stayed up until WAY past my bed time to finish it. Compulsive stuff.